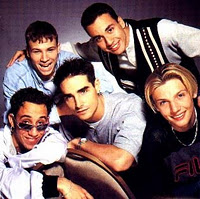 Long lost Backstreet Boy Kevin Richardson re-joined his ageing comrades on Friday in the middle of their performance of erstwhile Burger King jingle “I Want it That Way” at their joint concert with New Kids on the Block (as “supergroup” NKOTBSB).

I will warn patrons of this site right now, I adore the Backstreet Boys, always have, all 18 years they’ve been dishing out over-processed pop and convincing girls to fall in love with them. I just love them, I don’t want any guff about it. That said, I’ll try and limit my unsophisticated gushings to a single rarely-published category called “Guilty Pleasures”, to be avoided by the snobbier… I mean, “more culturally evolved”…. among you. (Warning, I also love Taylor Swift- same rules apply).

With that out of the way, let’s talk Kevin! Well, actually, Kevin having always been the second-least interesting band member (after Howie, obviously), the only interesting thing about his return was gauging whether the other guys were happy to see the deserter. If they weren’t (which I wouldn’t have been, if I were them, left one guy down to convince a cynical music market that we weren’t done yet), they faked it pretty well and welcomed him back with hugs. It was nice to see the boys back the way they were at the height of their career.

Actually, you know what, in the years Kevin’s been gone, Howie’s really grown on me and my love of the band hasn’t actually gone down at all. The old guy just doesn’t fit in anymore. Get rid of him, the boys are better without him.