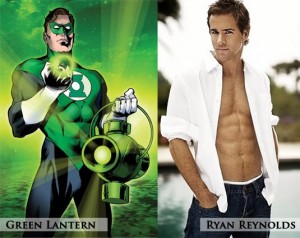 Green Lantern and his panty-wearing friends

I have a theory. I like to call it the “panties of justice*” theory. It’s about what separates easily adapted superheroes from the ones who seem to struggle on their way to the multiplex. It’s basically the difference between Batman and Wonder Woman. Both are noble creatures with a complicated, fascinating backstory and great personal strength. Yet one of them fights crime while wearing a state of the art suit of body armor, and one wears the panties of justice. In the world of comic books, or their cartoon adaptations, the panties of justice look just fine. We buy into them. But on the big screen? It’s hard to take a heroine seriously who chooses to outfit herself in what amounts to little more than a patriotic bathing suit.

Like Wonder Woman, Green Lantern is a character who can work really well in comic book form. In fact, I’ve often thought that GL is one of the most versatile members of the DC comics cannon. And the idea of the ring is really cool. The limits of its power are only what you can imagine (which is a problem in and of itself, but more on that later) and its use on a galactic scale gives the stories a breadth that’s missing from tales of Metropolis or Gotham. Still, in bringing Hal Jordan and his skintight suit to the silver screen, you are inevitably confronted with the ridiculousness of giant green fists materializing in thin air to punch out your enemies. The inherent goofiness of this when set within a traditional superhero-on-film world makes for the movie incarnation with its very own “panties of justice.”

The success of movies that have to deal with this issue lies in their ability to overcome their panties. Thor did it by simply making joke after joke about how funny it was to watch the over-the-top Thor deal with daily Earthly annoyances like waitresses and cars. Batman and X-Men do it by minimizing the amount of goofiness in their premises. And Spiderman managed to make us forget about it by wrapping the story in so much “gee golly” awe that the goofiness seemed at once inherent in the form and completely undistracting. The less-successful superhero movies (Daredevil, The Phantom, Catwoman, the two Batmen under Joel Schumacher) fail to adequately deal with the problem, and therefore bomb.

I think that might be ONE of the reasons critics have been less-than-kind to the Ryan Reynolds-starring Green Lantern vehicle flying into multiplexes this summer. Another is that the movie is often an overblown goofball mess, sharply contrasting with the dark tones of other DC offerings. There are a lot of plot holes, dumb decisions, convenient plot twists, and melodramatic monologues.
But… it’s also a lot of fun.

Ryan Reynolds is kind of wasted as Hal Jordan. Don’t get me wrong, he’s charming as heck and that man was pretty much born to play a superhero, but the Hal of the comics was far less morally dubious than his celluloid counterpart. Reynolds excels at playing ridiculously good looking man boys who have just a hint of danger to their wise cracking. Hal of the comics was a little more morally upstanding, and thus the Reynolds adaptation is forced to tread the middle ground between Reynolds’ wheelhouse and the true character (on a sidennote, Reynolds was born to play The Flash, the fast talking, quick witted speedster). Still, Reynolds is probably one of the most consistently enjoyable faces on the screen today, and despite the fact that he’s not exactly my ideal Hal Jordan, he definitely lights up the screen when he’s on it..

And yes, the tale of OA and Parallax are unfathomably goofy. If you didn’t already figure out that this Green Lantern was going to be an awkward mixture of hard science fiction+superhero movie+action comedy, that awkward beginning voice over/information dump more than sells this idea. But it’s engaging, and fun, and makes its own sort of convoluted sense.

And far be it for me to say anything nice about the erstwhile Ms. Serena Van der Woodson (Blake Lively), since she’s mostly gravel-voiced and dead-eyed throughout the movie, but the character of Carol Ferris is actually pretty refreshing for a superhero love interest. Not only is she introduced as a certified badass in a flight suit (contrast that with Transformers introduction of Carly half-naked), but she’s also consistently well-spoken, intelligent, supportive and able to do useful things in combat scenarios. Sure, she’s saved by Green Lantern once or twice (he’s the superhero, after all), but the film shows surprising levels of respect for the character by having her make intelligent decisions when faced with certain doom.

I’m not saying Green Lantern makes my top 10 superhero movies list. It doesn’t. But on the scale from Daredevil to The Dark Knight, I’d say it falls pretty squarely in the middle. Maybe it’s the advantage of taking my sweet time to see a movie, rather than rushing out right as soon as it’s released, but I really enjoyed the time I spent within the battle between Will and Fear.

*I spent a summer working at the Hall of Justice at a certain amusement park that made us sign confidentiality agreements, and this is what we used to refer to the bottom half of Wonder Woman’s costume as.