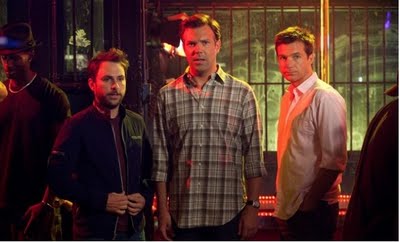 It’s hard to write about good comedies. Sometimes something clicks, and I can find some sort of narrative hook for writing about why, say, I find the jokes of I Love You Man so effective or why The 40 Year Old Virgin changed cinematic comedy. But sometimes you see a comedy and just think, “Damn. That was well done.”

Such is the fate I find myself facing after seeing Horrible Bosses.

This movie fulfills its purpose in every way. It does a fantastic job crafting bosses evil enough that you can actually find some sympathy in the plotting of their murders. It creates protagonists who are at once likable, and believable, in a hapless way, in their ability to murder their own bosses. And it sustains comedic tension while only briefly pushing the boundaries of believable cinematic vision.
That it does all this while remaining stubbornly filthy and goofy is a testament to how well done this film is.

From its across-the-board fantastic cast (Colin Farrell and Jennifer Aniston, in particular, play well on their established personas) to its absurdist leanings (not going to spoil the joke, but the punchline with the Jamie Foxx character was enough to redeem that actor for me), this is otherwise-disposable comedy done really well.

I’m someone who rewatches comedies a lot. And I can always tell if I love a comedy movie if about halfway through I realize I’ll go back and watch it again. I was ready to rewatch Horrible Bosses about ten minutes in.