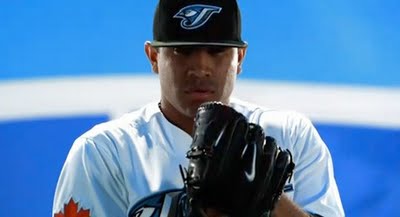 I’ve always argued that the reason baseball is better than all other sports (yes, I said it, it’s not an opinion I find easy to hide) is that it’s a rare true team effort. No matter how great the single superstar on your team (or even the handful of superstars), one man simply cannot win the game alone. In most team sports, a single high-scorer makes or breaks your team. With baseball, even the best of the best only comes to the plate once out of every nine at-bats. The most solid pitching can’t win without run support and the best hitting can’t overcome mediocre pitching. Unlike any other sport, baseball teammates truly need each other.

There are very few exceptions to this rule. The most recent is Blue Jays LHP Ricky Romero who came as close to putting on a one-man show last Sunday as a baseball player can get. The pitcher tossed a complete game, giving up only 4 hits and no runs.  Mind you, there was the occasional fielder who had to actually, you know, field those outs, but you get the point. Then, in the rarest of rare fashion, Romero backed himself up by coming to the plate in a National League ball park. On a team not known for clutch production (we do love you though Doc, welcome back to town!), Romero ensured himself the win by providing his own run support with a 2-RBI single in the sixth (his first major league hit). The Jays went on to sweep the Cardinals with a 5-0 victory. No, Romero didn’t actually score any of those runs, his hit brought in players who’d already made their own way to 2nd and 3rd, and he certainly didn’t play defense all on his own. But in the truest of team sports, his effort on Sunday was notably independent.