Propeller Shakespeare Company, performing through June 19th at the Huntington Theatre in Boston, is a damn cool company. This UK group’s respect for the text, their return to basic themes and their bold all-male casting make them somewhat traditional in their approach to Shakespeare. But then there’s masks and shiny suits and sombreros and heads floating in jars and a supremely physical, modern sensibility to their productions. Their current stagings of Comedy of Errors and Richard III are bursting with bold choices- they’re daring and strange, sometimes haunting, sometimes silly, sometimes exactly what the doctor ordered to make a tough scene finally work. But amidst innovation and insanity, there’s a real anchoring in the history of the text that makes Propeller a fascinating mix of the old and the new. 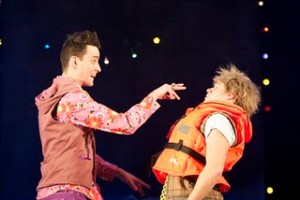 The lighter production, The Comedy of Errors, is also the lesser, if only because it’s a dramatically inferior text. Leading men Dugald Bruce-Lockhart and Sam Swainsbury tackle the Antipholi with a lot of verve and a grain of salt. Both charming, funny and fully committed to their silliness (pink pants, coiffed hair and slick smiles abound), Bruce-Lockhart (Syracuse) proves the funnier of the two though Swainsbury (Ephesus) is the more engaging. Their Dromios (Richard Frame and Jon Trenchard) also prove wonderfully fun to watch, though I can’t for the life of me remember which is which most of the time. In fact, it’s the Dromios who deliver the only bit of Comedy of Errors that I ever find particularly touching (it’s a play that is sometimes funny, rarely meaningful)- the final lines of “We came into the world like brother and brother;/And now let’s go hand in hand, not one before another” get me every time, and these Dromios grasp that little bit of sweetness and run with it beautifully.

The rest of the ensemble is good but plagued with the simple craziness of the story. The women- Adriana (Robert Hands), Luciana (David Newman) and the courtesan (Kelsey Brookfield)- are predictably broad with all the giggling and prancing that usually accompanies comedic cross-casting. Though there is a moment or two when Hands lets his Adriana be a real person and it’s those times when he really starts to get at something interesting, leaving gender lines behind. Of the rest, Tony Bell’s Pinch is absurd in the worst way but Thomas Padden manages to make Angelo the goldsmith into a thoroughly memorable character.

Why such a clearly smart company decided to do such a truly silly play is beyond me, but what’s interesting is how very self-aware they are about that questionable decision. They don’t so much try to make the flawed text into a good one as throw caution to the wind and have fun with the text they have. This makes for an outrageous production with an almost cartoonish aesthetic and more energy than a daycare centre after naptime. It also makes for the only Comedy of Errors I’ve ever enjoyed. From Dominic Tighe’s mustachioed porno cop to Luciana’s nunchuck routine, it’s the absurdity with which Propeller (led by director Edward Hall) deals with the absurd text that makes it work. 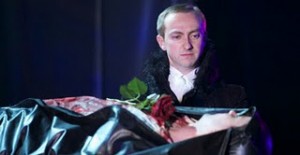 Richard III gets a similarly bold treatment, though in a very different way. Any fear that the company won’t be able to translate their broad female portrayals into dramatic performances quickly vanishes when erstwhile Dromio Jon Tenchard takes on one of Shakespeare’s most famous scenes without affectation or insecurity. As Lady Anne, he sets the tone as early as Act Two Scene One for a procession of excellent female performances to come (Dominic Tighe, oozing oddball machismo in Comedy of Errors, is the female highlight of Richard III with a subtle and engrossing performance as Queen Elizabeth).

I’ve often considered Richard III to be essentially a one-man play with a light layer of supporting women and a terribly dull layer of lords and murderers at its base. Not that that makes it any less of a brilliant text. Usually, the delicious title character is plenty to entertain and affect the audience for the full 5 acts. Here, Richard Clothier fares well with the taxing part. His Richard is wonderfully fun, almost comical at times, but is allowed more blood on his hands than is strictly textual- creating an excellent contrast between his charm and the brutality of Anne’s on-stage murder and the particularly gruesome hacking of the murderers (who normally survive). Gruesome is a recurring adjective in this production, which plays on the sterilized court of presentation vs. the gory underbelly of bloody politics. The effect is marvelous, if troubling.

But the most notable thing about this production, for me, is that it is not a one-man show with a standout woman or two. Some of the most interesting performances and interpretations come from the most unexpected places.

Ratcliffe, for example, is phenomenally creepy as played by Dugald Bruce-Lockhart, no more the charming Antipholus of lighter times. The stoic lord, terrifyingly upright, makes a practice of counting down deaths on his pocket watch, the irritating ticking sound marking time until he can scratch another murder off his to-do list.

Tyrell (Wayne Cater) is even more horrifying. A wordless childkiller, he wanders on and obeys orders with the distinct mark of someone lacking the mental ability to question. With children’s toys dangling from his work belt and a clear mask distorting but not obscuring his features, Tyrell is amorally innocent, collecting tokens from victims while never fully comprehending what he takes from them. It’s truly chilling.

Taking another prize as a creepily morphed former-Antipholus is Sam Swainsbury, the creepiest murderer in a play full of bone-chilling murderers. What he does is use that sweet little babyface of his. 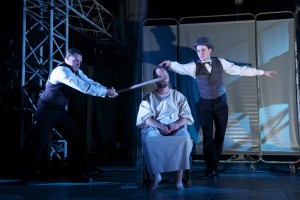 With an enchanting smile and strangely reassuring grace, he lures the audience in like a bimbo in a frat house- telling us its all fun and games and he just wants to get to know us a little bit better- cracking jokes, horsing around. Then he takes a baseball bat to Clarence’s head, that charming smile never fading and a jaunty bowler perched perpetually atop his pretty little head. It’s always the “sweet” ones; nice really is different than good.

Unafraid of scarring people for life, Propeller takes a horrifying play and pushes it further than even the violence-desensitized modern audience could predict. And it’s all the better for it. With nightmare haunting performances from the smallest of roles, heartbreaking women obliterating expectations and a leading man who effortlessly pulls yours affections to where you know they shouldn’t be, Propeller’s Richard III is not something that should be or could be forgotten any time soon.

Fringe TO 2014: Kelly, Day 7
Carrie: The Musical at Southwark Playhouse
The Ramones Non-Musical: Four Chords and a Gun