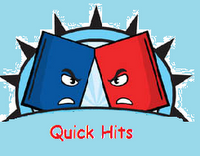 Welcome to a new recurring feature over here at MyBookshelf. Quick Hits is a monthly feature that will allow us at MyBookshelf to share a little bit about some books that we love, whether they be classic favorites or new discoveries. Rather than providing long reviews, these quick hits will give you just a little taste of the books before sending you over to Amazon.com to check out the books more in depth.

Read on for our first edition of Quick Hits

1. Eon/Eona– This young adult fantasy series is unique thanks in large part to its protagonist: Eona, a young woman who escapes her life of poverty by dressing as a boy and using her innate talent at controlling dragons. Her story starts off with small issues of local politics in Eon, and then spirals into a world changing epic that comes together beautifully by the end of Eona. Although it occasionally falls victim to the current push in Young Adult Literature to have all series centered around a love story, the fascinating mythology and intriguing characters make it well worth a read for genre fans. (by Allison Goodman)

2. A perennial favorite of mine that makes its way off the bookshelf at least once a year, The Amazing Adventures of Kavalier and Clay is a must for anyone who has ever read a comic, been a lost teenager, or wondered how exactly they were supposed to transition into adulthood. (by Michael Chabon)

3. Bossypants is Tina Fey’s new memoir and as the title implies it tells the story of Fey’s turn from awkward adolescence to head of SNL’s writing staff to creating and producing her own show. And it is at turns hilarious, profound, and just on the right side of heartfelt. For bonus points, get the audio book, narrated by Fey herself, which manages to turn her insightful memoir into not quite a 6 hour stand up comedy routine, more like a series of fascinating anecdotes told to you over coffee by a really good friend. Except I can guarantee you no friend of yours is as funny as Fey.