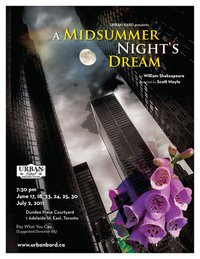 My love for Urban Bard Productions has been well documented on this site. So, naturally, I was incredibly excited to see what director Scott Moyle has come up with for the uber popular and oft-insane comedy A Midsummer Night’s Dream.

The first thing to note when going to see Urban Bard’s Dream is that you have to walk through Dundee Place at 1 Adelaide St. E to get there. This is not something my friends or I knew, so we almost missed the show looking for signs pointing us to the courtyard. But once we found it, what was waiting for us was a fairly typical if slightly unpolished (and sometimes silly) Urban Bard production.

There is, of course, Moyle’s trademark clever blocking and use of space (the use of the glass maze is brilliant), as well as the traditional challenges of said style (people wandering through the scenes, ambient noise drowning out the actors, visible offstage areas complete with in-sight costume changes, etc…).  There are also a couple returning company members who are used to such challenges and have long since learned to speak up (some of the newer castmembers, not so much). Though not quite as dynamically staged as last year’s productions in College Park, this Dundas Place Dream uses all of Urban Bard’s unique strengths (including their remarkable stage combat training) to create a memorable piece of theatre that has all the passerby wonderment of the best kind of flashmob.

In my experience, A Midsummer Night’s Dream tends to be partly great, partly inconsequential and partly truly truly silly. I usually find the Athenian lovers to be tons of fun and the fairies a decent distraction (though these things have been known to be reversed); the mechanicals almost always annoy me. This production sports the same breakdown but in an entirely surprising way. In a stroke of genius, Moyle and his actors manage to develop a cast of mechanicals whom not only can I stand, I actually really enjoy. Christopher Mott, in particular, is wonderful as Peter Quince- a nervous perfectionist who mouths along with his own play and is perpetually in “problem solving” mode. Jonathan Llyr gives one of the production’s clearest performances as scene-stealing Bottom (his donkey-talk is particularly amusing) and Nate Bitton’s Snout alone is worth the price of admission (pay-what-you-can, suggested $15) for his sarcastic background work. In fact, for the most part, the cast is at their best when playing their distinct and well-crafted mechanical roles. Bitton’s unmemorable Demetrius has nothing on his brilliant Snout; Tammy Everett, whose Helena hits the occasional sympathetic note but spends entirely too much time whining, is excellently exasperated as Robin Starveling (“moonshine” is always a highlight); and Sabrina Kolbegger, unforgivably shrill and overblown as Hermia, is cute as the eager Snug.

The other actors prove a little more balanced- good or bad or mediocre, the whole way through. Ryan Fisher, the final mechanical, is just as good as  the love-struck cool guy Lysander as he is as the dorky upstart Flute. As best he can, the endearing actor conjures romance out of his strained chemistry with Kolbegger and makes the problematic “Thisbe” role funny instead of torturous with a southern belle flair. On the other side of the coin, Arlin Dixon does little with either of her queen characters. Her Hippolyta is a horrible cold fish, a choice that either needs to be more purposeful or abolished completely (I vote for the latter), and her Titania is unnotable. Melanie Hrymak doesn’t make much of a mark either, her Puck being mostly overshadowed by her costume (more on that in a moment). Patrick Cieslar plays Oberon and Theseus similarly- authority, charm and general likability that serves its purpose but doesn’t make much of an impact.

The costumes and props, as they pertain to human characters, fit well and serve their purpose. I especially like the black+white+one key colour look of the mechanicals. Hermia’s hair bow is simply ridiculous, however, and really costs her character by making her look stupid. And someone really should be fired for taking a beautiful suit tailored perfectly to the handsome Cieslar and putting it over kneepads and adding a faux-cravat that looks like a regular tie stuffed down the front of his shirt.

As for the other costumes, or really the interpretation of the fairies altogether, well… they’re, um… unusual? Brave? Interesting? Okay, I mostly thought they were stupid. Hilarious at times, creepy at others, just plain strange in general. Yes, I’m sure there was great thought put into why Titania is a bird-like thing, or why poor Oberon is made to look like a tree (well, a tree with a distinct moose-like quality), but as much as I tried to see it for its artistry, I couldn’t help but laugh every time that silly praying-mantis thing came near me or the flower guy started poking the bug thing in the eye. It’s silly. The majestic fairies are decked out in cheap spandex animal-hybrid costumes, causing the audience to spend more time wondering what Puck is supposed to be (a rodent? a wolf? a bat?) than listening to what she’s saying. That said, the barely-there-ness of the fairy costumes does allow for lightening-fast quick changes, the only possible way all that double casting could work. As it is, it works just fine, everyone hits their cues and kept the pace moving well.

As much as I love Urban Bard, this is their weakest production that I’ve seen. Silliness aside, it just seems to lack the loving oomph of Twelfth Night and Two Noble Kinsmen. Those had much more of a ring of being labours of love. This seems more commercial, a stepping stone to less commercially successful but more artistically fulfilling material. But it’s still a fun production and just makes me look forward to their next one all the more.