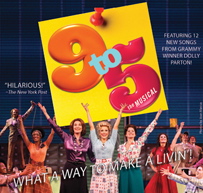 “9 to 5” brought to you, inescapably, by Dolly Parton

9 to 5 is a rousing new musical, an adaptation of the 1980 film and the recipient of multiple Tony nominations last year. The Dancap production, which premiered last night and runs until July 10th at the Toronto Centre for the Arts, features a truly remarkable cast in full energetic array against sets and costumes every bit as bright as their plastered smiles and the relentlessly uptempo score.

The principal men fare well, Joseph Mahowald’s thundering vocals shining through his disgusting (read: correct) performance as Franklin Hart, the world’s worst boss, and Sean Montgomery softening the show’s feminist message with his performance as Joe, a sweet guy with a sweet voice just trying to convince the girl to like him. Montgomery, in particular, gives a performance that really makes you smile.

But 9 to 5 belongs to the women, that’s sort of the point. Dee Hoty is tremendous as Violet Newstead, the veteran office supervisor who sets the plot in motion. Armed with a stronger voice than her predecessor, Hoty channels all the smart-accomplished-independent-snappy woman-ness that Allison Janney brought to the original Broadway production. She does it with a little less comedy but brings a grounding that is really nice and an excellent world weary authority (especially in the fast-paced “Around Here”). Mamie Parris is similarly, if not more, wonderful as Judy Bernly, the newly-divorced new hire at the office. At first she’s merely lovely- all the charming, sweet, perkiness and strong soprano that you want from the secondary female lead. Then she takes on “Get Out and Stay Out” and you’re picking up the pieces of your shattered expectations from the floor of the massive theatre. It’s one of those heart-on-the-floor, arms-flung-wide, belt-til-you-break performances that has you wondering why this woman is spending her time on seeming trivialities like 9 to 5.

I was quite excited to see the third lead, Diana DeGarmo as Doralee Rhodes. Season 3 (aka 2004) was the year that I was really into American Idol (though I’ve always watched, at least casually) and DeGarmo is to this day my favourite contestant they’ve ever had. She’s sweet as pie, cute as a button and all sorts of other cliches thrown onto a 16-year-old from Snellville Georgia, but she’s also got pipes that could shake the floorboards*. Since 2004, DeGarmo has lost oodles of weight and aged far more than 7 years, so when she showed up for opening night of 9 to 5 all dolled up Dolly-like to play the composer/lyricist’s former role, I could barely recognize my favourite former Idol. It really made me kind of sad. She’s still got those pipes, I would assume, though it proves impossible to tell under the piles of literal and metaphorical costuming she has on. But I’m not sure my disappointment is DeGarmo’s fault.

The real shame of Doralee is that the character should be my favourite- I’m a sucker for the smart and kind character misunderstood because the post-modern protagonists think her looks have given her too many advantages and she therefore must be dumb, slutty or horrible in some way. But this character seems to be trapped in an unforgiving box of mimicry. Though Violet and Judy have long since moved on from their Lily Tomlin and Jane Fonda incarnations, Doralee, it seems, is not allowed to be a character so much as a Dolly Parton impersonation. Maybe it’s because the iconic singer is so closely tied to the musical (in fact, she narrates it, hovering on a giant screen over the stage), or maybe it’s a lack of ingenuity in the director or the actresses who have taken on the role. Either way, the excellent character suffers under the weight of impersonation. It’s next to impossible to understand a word DeGarmo says, not to mention what she sings, her tremendous voice belittled to an airy squeak in tribute to the creator of her role. It really is a shame- for the talented DeGarmo, for the could-be-fabulous Doralee, and, really, for Parton, who is so much more than the caricature of her captured on stage.

Overall, 9 to 5 is not a terribly meaningful musical. It has some feminist messages going for it- something to say about workplace equality and employee rights and such things. There’s also a good friendship story, some solid single parenting (in the “nice relationship” sense, not in the “example setting” sense), a great arc about independence and even a sweet love story. But that’s squeezing any depth that’s in there for all its worth (in the same vein as the “Bring it On is about race relations” argument). Really, 9 to 5 is nothing more or less than bright, energetic and decently funny (though often absurdly broad). But its well cast and well directed and, hey, why not mine the depth wherever we can find it? It makes things just that much more interesting.

*Because I couldn’t resist, here’s the video of DeGarmo’s best Idol performance.