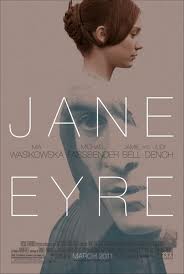 The newest film version of Jane Eyre is a cold affair. It’s gray-tinted, rain-soaked, slowly paced and underplayed. None of this is to an unforgivably negative effect. In fact, this gray sense of dismal circumstance works sort of perfectly for Jane Eyre, a dreary text in itself. It does, however, make for a rather unpleasant film experience and adds nothing new to the oft-adapted text.

Leading lady Mia Wasikowska competently takes on the iconic literary figure, her mature understatement sometimes crossing into monotone territory but generally filling the screen well. Michael Fassbender is too conventionally and inarguably good looking for Mr. Rochester and his tortured side isn’t particularly well developed. The result is a less interesting but more likable leading man than is standard. Sally Hawkins, though underused, is a nice surprise, playing against type as the bitter Mrs. Reed, and generally the whole supporting  cast is pretty good (especially Jamie Bell as the fascinating John Rivers).

Many of the smaller characters (Hawkins and Bell’s parts most of all) are cut down quite a bit. This means a lot of what makes them interesting goes away, making them little more than fifth business for the A plot. The Bertha issue, for example, is shorthanded to the point where it sort of stops making sense. Perhaps the most prominent of these cutting victims, however, is Dame Judi Dench (Mrs. Fairfax) who simply has to be pickier with her film choices.

As much as Dame Judi slumming it has become a standard of dreary British period pieces, so has almost everything in this film. It’s not bad, it’s just been done. Even the estate supposedly belonging to Mr. Rochester is unmistakably 2005’s Pemberley (aka the home of Pride and Prejudice‘s Mr. Darcy). Jane Eyre is a decent film, in a technical sense, but it neither says anything new nor entertains enough to make up for that.