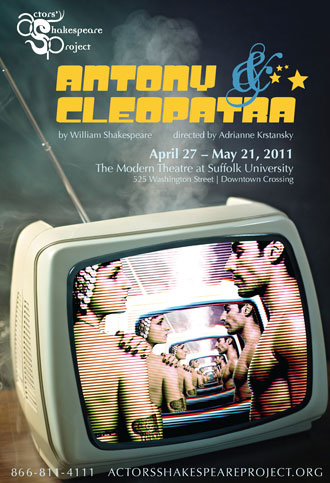 ASP Ends a Brilliant Season on an Iffy Note

I love The Actors’ Shakespeare Project, I really do, but this will prove a very short review because I far from loved their Antony & Cleopatra (playing until May 21st at The Modern Theatre). I could write for hours about Adrianne Krtansky’s clunky direction, the snail-like pacing and strange focus. I could complain loudly about Anna-Alisa Belous’ cheap Halloween store costuming, the set that appeared to be made out of mattresses or Jeff Adelberg’s predictable and unbalanced lighting design. I can take a moment to mention the complete lack of chemistry between the title characters (James Andreassi and Paula Plum), the silly staging of the asp deaths and the strange witch-lady Cleopatra scenes. I could have a fit over the immature take on Octavia (Giselle Ty).

But instead I’ll say that Mara Sidmore was a lovely Charmian and Richard Snee delivered a nicely conflicted Enobarbus whose comic timing saved much of the first half. Johnnie McQuarley also fared decently well, though he was over-worked in his multiple roles.

A terrible production for a company that can do and has done much much better. Best not to dwell.