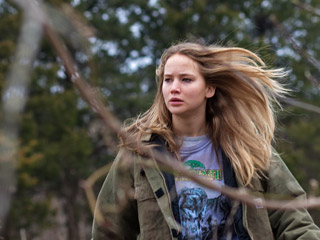 The Hunger Games Makes the Jump to My Cinema

I have been obsessed with The Hunger Games since I first sunk into Katniss’s world. Over on My Bookshelf, I waxed poetic about how the series helped me recapture that Harry Potter, so eager in anticipation magic. So I can’t believe it’s taken me this long to comment on the casting of the scary-as-hell, god-i-pray-they-harry-potter-it-and-not-golden-compass-it movie adaptation.

First, Katniss. The girl who was on fire. For this dark skinned, dark haired, badass warrior, the movie chose Jennifer Lawrence, who may be badass but is decidedly not dark skinned nor dark haired. And honestly? If the movie wants to cast a blond oscar-nominee over a brunette who can’t act, I’m down with it.

That goes for Peeta and Gale too. In the books, Peeta is blonde and I always imagined kind of all-american-boy looking, with broad, bakers’ shoulders and an open face. Gale is darker skinned and haired, more like his long time best friend Katniss. And the two actors they cast? Josh Hutchinson, dark haired and smaller, is Peeta, and the light-haired all american-boy Liam Hemsworth is playing gale.

But honestly? I never cared that Daniel Radcliffe had blue eyes rather than green, and I don’t care that Maggie Smith is older than I pictured McGonagall. What I care about is that these actors are capable of bringing my beloved characters to life. And by casting people with no overt physical resemblance to the characters (e.g. by NOT casting Alex Pettyfer as Peeta just because he has blond hair, despite the fact he can’t act), I’m making the leap of faith to believing that they are casting based on talent. A leap of faith underscored by how talented I KNOW Jennifer Lawrence and Josh Hutchinson are.
So color me cautiously optimistic for the movie adaptation of this challenging, fascinating and heart breaking book series.
And also cautiously optimistic they’ll cast Robert Downey Jr. as Haymitch.