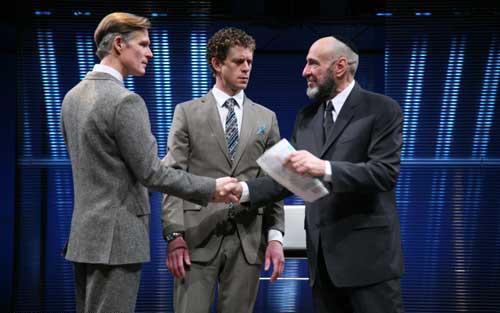 Guest Review: “The Merchant of Venice”

Theater For a New Audience’s The Merchant of Venice, a restaging of a New York version of Shakespeare’s famously controversial “problem play”, is an odd duck of a production– a whack-a-mole of quality that pulls concepts and character arcs off stage just as they begin to fully form. The production is nowhere near a loss– the concepts proposed are always interesting and occasionally fascinating, and the acting is solid with hints of stellarity– but they never come together in a complete, cohesive whole.

Director Darko Tresnjak presents an almost dystopian setting of fratboy-esque shenanigans and the oldest of old world class distinctions in modern trappings, where Portia’s caskets are Mac laptops and many scripted conversations take place over cell phones. This is a clever and relevant choice of aesthetic that connected strongly with the audience– some of the biggest laughs of the night came from Jacob Ming-Trent’s pot-smoking Launcelot Gobbo and a Bluetooth-challenged servant of Portia’s.

But the concept is totally ignored in what could have been its showcase: the trial scene– presented merely as Shakespeare scripted it, with only a Big Brother-like Duke speaking from the mezzanine and the characters’ modern dress to remind us that this is not 15th century Venice. Here, too, the infamous religion-based bigotry of the play feels weirdly out of place. Antonio’s devotion to his Christianity reads as little more than an excuse to antagonize Shylock, as Shylock’s devotion to his Judaism does vice versa (which a yarmulke and a Jewish prayer on the sound system during scenes set at Shylock’s house do little to smooth over). Melissa Miller’s lovely performance works hard to remedy this problem, making her Jessica emotionally torn between her (here, refreshingly, true) love for Lorenzo and her obviously deep faith. But a Merchant where Jessica is the most religious of the lot is clearly missing a vital piece of the puzzle. The duality between religion and modernity could have been intriguing, but the dissonance is instead simply glossed over.

Another stumbling block comes in the solidity of the character arcs, particularly of the main four. Tom Nelis’ Antonio and Lucas Hall’s Bassanio seem purposefully set apart early in the play, suggesting little of the deeper relationship presented in the later acts, and nothing of a relationship that would lead to the moment in the trial scene where the characters share an impulsive kiss. (On a related note, the homosexual undertones of the play are generally bizarrely dealt with– aside from a one-off moment of broad comedy between Solanio and Salarino regarding Antonio’s farewell to Bassanio, and the aforementioned kiss, there is nothing to even suggest anything more than a friendly coworker relationship between the two men.)

Kate McCluggage’s Portia is informed strongly by her devotion to her chastity, not even touching Bassanio before he wins her via “casket” (a novel idea in this modern setting, given the compulsion to play one of Shakespeare’s strongest women as more modern than the text would have her). But her aloof attitude brings down several other moments- her obvious discomfort with the other suitors, for example, shows her as more snobbish than was probably intended; and when she first discusses Bassanio with Nerissa, it seems she only barely cares for or even remembers him. The trial scene, Portia’s shining moment, is marred by conflicting choices– angered by the suggestion that her sworn husband loves another, she seems to encourage Shylock to take his bond, a moment that clashes immediately with her twisting the idea of a “pound of flesh” to save the same man’s life. And then her rage completely disappears from the play: Portia’s fifth-act ploy of lost rings is played as a mere game with little subtext; she welcomes Antonio warmly to Belmont and the happy ending for her and Bassanio seems odd alongside some glaring issues. Any one of these individual character points would make for an interesting Portia, and all are well-acted, but they mesh together in a way that, rather than rendering the character complex, renders her inexplicably inconsistent.

F. Murray Abraham’s clever, overconfident Shylock is easily the most cohesively acted role. But without a true devotion to his Judaism, or anything to replace it, he is at a loss for a strong character base. The actor’s intelligent but lightning-fast speech is also often difficult to understand.

The chemistry between the actors is often off: Antonio and Shylock’s antagonism seems more like one-upmanship than true hatred or bigotry; Nerissa and Gratiano don’t even seem to like each other until the play’s final moments (Christen Simon Marabate’s patient Nerissa is unfortunately underused in general); Bassanio and his friends are rarely on the same part of the stage (the idea to separate the characters with set pieces during group scenes looks striking but prevents most of the characters from doing anything more than standing when they don’t directly affect the action); and Portia’s aloofness makes her seem distant, even from her husband.

Jessica and Lorenzo, however, are a shining light of cohesive character and palpable chemistry, with obviously intense love roadblocked by her abandonment of her father and her faith, and his inability to understand her struggle with these issues. Their relationship is left unresolved but hopeful, a stark contrast with the overly perfect happy ending given to the other characters.

Tresnjak seems to have taken the “problem” in “problem play” to heart to create a sharp and timely production. The bluntly modern setting and upper-class atmosphere light up the many forms of bigotry in the text: almost none of the characters are entirely pleasant to watch, and there is an overall uncomfortableness that forces the audience to recognize injustices they see every day outside of the heightened world of this dystopian Italy. But the world of even the most problematic of plays is only made relevant by the believability of its characters, and only made accessible by a well-constructed world that, though the audience may not live in it, is understood to make sense. It is in these areas that this production collapses. It’s difficult to care about characters we don’t at least enjoy watching, if not actively like, and we can only relate their trials to ours if we can map their world onto ours. So while this (beautifully presented, it should be said before the end of this review, with some truly gorgeous lighting) production has moments of greatness and some fascinating and novel concepts, it ultimately attempts to have its hand in too many pots, preventing it from being the wonderful production one can see under the flaws.