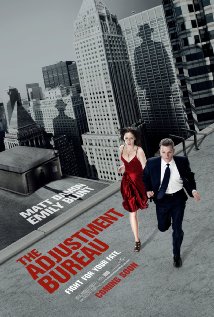 The Adjustment Bureau could have been a really great film. At its core it’s full of interesting philosophical questions, ones that introduce possibilities that both fit into and are new to global spiritual narratives. Ideas of fate, free will and intelligently designed plans are expressed alongside darker ramifications like the sacrifice of potential in some for the ultimate success of others. The thought that the plan for our lives is always being rewritten, that there are angel-like forces at work in our world to enforce it, the fact that there are lingering effects from previous incarnations of our plan, the possibility that our plan involves cutting someone we love’s life short so we can be driven to succeed… the fact that there is a plan at all, an architect, the chairman! There is so much intellectual possibility in this film.

And it expands from there. Writer/director George Nolfi plants these ideas into the world we’re currently living in and then ties them back through time, using the highs and lows of human history as evidence for his mythology. The whole thing is quite brilliant. But then it starts to break down.

The problem is that despite its lofty possibilities, The Adjustment Bureau is hokey, simplistic and predictable. It’s an entertaining film, to be sure, but it could have been so much more than that, making the fact that it’s somewhat mediocre so much more painful. From the obnoxiously cinematic first kiss between Emily Blunt’s Elise and Matt Damon’s David in a hotel bathroom, to the use of fedoras and rain as the major MacGuffin of the story, to the ultimate theme that love and free will are worth fighting and risking (and ruining) and everything for, The Adjustment Bureau falls victim to Hollywood silliness. It seemed almost as if Nolfi had a kernel of brilliance then simply took too many notes, destroying his own piece with predictable cheese that it didn’t need.

Which is not to say that the film is without its high points. As I said, the backbone of the story really is fascinating. It’s also a tightly paced movie with sharp dialogue, interesting characters, well-developed relationships and fun topicality (David visits The Daily Show on his campaign tour and poses with the mayor of NYC).

If there’s a highpoint in the execution of the flawed script, it’s the casting- it really is dead on. Emily Blunt is charming and feisty, somehow both memorable and believable as Matt Damon’s dream girl. Michael Kelly strikes up a character-defining rapport in the potentially unremarkable role of David’s best friend/campaign manager. John Slattery is predictably perfect as one of the chief mysterious men from “the bureau” and Anthony Mackie is exceptional as his more conflicted colleague. But most importantly, it became very quickly obvious that Matt Damon was the only actor on the planet who could have played the central role of David. I’ve never met anyone who doesn’t actively like Matt Damon, not a soul, and that came in handy for this character. If ever there was an actor who could be believed winning a bar fight and a presidential election while carrying a weighty love story all at the same time, it’s him. He’s got the charm, intelligence and social ease to be an action hero and an Oscar-winning writer, a comic, a philanthropist, a prankster, a father and a famous best friend… not to mention a highly acclaimed dramatic actor. David is the man destined to change the world; no one could have carried that part but Damon.

The Adjustment Bureau really is enthralling. It’s an entertaining film full of immensely likable people keeping you on the edge of your seat. But unfortunately it’s not a lot more than that. It could have been meaningful and mind changing, but instead it was grounded by its Hollywood hooey.