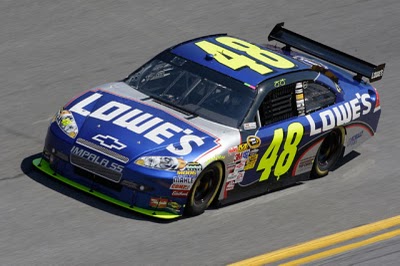 NASCAR held its biggest race of the season last weekend, the Dayton 500. Did anybody watch? Their biggest star, Jimmie Johnson, (Jimmie who?) has won the last 5 NASCAR season championships, known as the Sprint Cup. Would anybody recognize his picture on a cover of a magazine?

Ten years ago NASCAR icon, Dale Earnhardt Sr. was tragically killed at the end of the Dayton 500. At the time of his death, Earnhardt was a seven-time cup champion and had a record $42 million in career earnings. Following his death, NASCAR was on the lips of most sport enthusiasts and a must-watch event on Sundays. Watching the “Good old Boys” (or, as some would affectingly call them, “crash test dummies”) bump each other around and, often, off the oval track captured our imagination. It was exciting to see them drive only inches apart at over 200 mph. So what happened? Besides the die-hard redneck fans in the southern United States does anybody follow the sport? Why did people lose interest, stop caring and, more importantly, stop watching.

The answer is easy: the average sports fan wants to be entertained, not confused. To use an analogy- the number one reason people use as an excuse not to watch football (arguably the most popular sport in the United Sates) is that they don’t understand the game, they say that it is “too confusing”. The same holds true for NASCAR. The sport has gotten away from one race driver trying to go faster than the other and if he can’t go faster he will push, bump and sometimes grind his opponents out of the way to win. Today, team “strategy” is the key ingredient to winning. Sure you need a fast car but you also need help from a teammate or buddy to carry you around the track. When you listen to the racing commentary, they talk more about what the “team” has to do to win than what the driver has to do. It’s like bicycle racing, where the team protects its best rider for 3/4 of the race, and, lets face it, who watches bicycle racing?

Another confusing aspect of NASCAR is its scoring system to determine an overall season champion. Under the NASCAR point system you get points for winning but you can accumulate more points by leading the greatest number of laps during the race. What?? I always thought that the reason you competed was to win and “to the victor goes the spoils” Isn’t that the American way? How strange would it be to win the Superbowl then not be declared the champion because you didn’t hold the lead the longest during the game? How can you win the most races during the season and not win the overall championship?

The last confusing factor that has hurt the branding of NASCAR is, simply, its cars. It used to be a battle of the “Big Three”- you were a Chevy, a Ford or a Chrysler fan and you cheered for whomever was racing that brand of car. Nowadays it just isn’t the same to cheer for a driver racing a Toyota or Honda. Also, over the last ten years, NASCAR has fiddled with the cars. In 2007 they introduced the “Car of Tomorrow”, whatever that is, and some racing teams are still trying to figure how to be competitive in them.

NASCAR has some major repairs to do to regain its former glory in the general sports fan’s eye. If the average sport fan was not interested in the Daytona 500- the “Great American Race” and the Superbowl of the NASCAR racing season- then why would they be interested in following any of the other races during the season? Hopefully, it will not require the death of another NASCAR champion to rekindle interest in the sport.