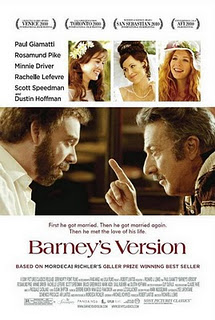 You probably didn’t see it. It’s only up for one Oscar (makeup?! really?!) and though Paul Giamatti won Best Actor at the Golden Globes for his truly extraordinary performance, no one really lends much weight to the comedy/musical categories or even pays attention to the Globes if the Oscars don’t seem to agree. But here’s what I’m saying: they’re wrong, you REALLY SHOULD see it.

Barney’s Version is one of the most touching films of the year, one of the wittiest, one of the most complex,  one of the most evocative. It’s expertly acted with the incomparable Paul Giamatti at its core delivering what I think is easily the performance of his career so far. He’s joined by the beautifully understated Rosamund Pike and the beautifully overstated Minnie Driver as well as Scott Speedman, who is excellent as Barney’s enigmatic friend Boogie, and the always-wonderful Dustin Hoffman as Barney’s eccentric father. The script by Michael Konyves, adapted from Modercai Richler’s novel, is superb, telling a fascinatingly funny and heartbreaking story.

That’s all I can say, I’ve run out of adjectives. Just see it, you can thank me later.