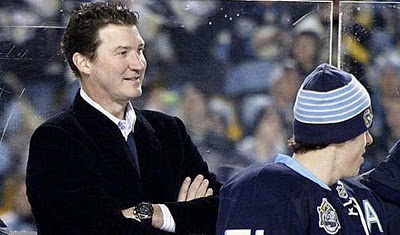 This past Sunday, former NHL superstar Mario Lemieux spoke up about the growing violence that has gripped the National Hockey League. An NHL Hall of Famer who now owns the Pittsburgh Penguins, Lemieux used the team’s website to respond to the NHL disciplinary action (or, as he sees it, lack of disciplinary action) following a fight-filled game between the Penguins and the New York Islanders two days earlier.

“Hockey is a tough, physical game, and it always should be. But what happened Friday night on Long Island wasn’t hockey. It was a travesty. It was painful to watch the game I love turn into a sideshow like that. .. The NHL had a chance to send a clear and strong message that those kinds of actions are unacceptable and embarrassing to the sport. It failed. .. We, as a league, must do a better job of protecting the integrity of the game and the safety of our players.  We must make it clear that those kinds of actions will not be tolerated and will be met with meaningful disciplinary action. .. If the events relating to Friday night reflect the state of the league, I need to re-think whether I want to be a part of it.”

These are strong words from a very influential member of the hockey community. Apart from Wayne Gretsky, Mario Lemieux is probably the most respected hockey player of the last 35 years. So why isn’t anybody listening to what he has to say? Why did his comments fall on deaf ears? Why hasn’t there been a flood of current and former hockey players, owners and members of the media speaking out as he did? Is it because of the “code”?

It is widely known that the police have what is referred to as the “Blue Code”. It’s not written down anywhere in black and white but it exists, essentially stating that police officers don’t speak out publicly against fellow police officers. Unfortunately, here in Canada, we have seen the “blue code’ in action too frequently in the recent past. The 4 RCMP officers in Vancouver, for example, who coordinated their stories about the death of a “violent” (read: scared) passenger in the airport.  A second incident was in Toronto this past summer at the G20 Summit when a peaceful protester was assaulted by the police. Even though many police officers were videotaped in the area and witnessing the assault not one came forward to testify. It was not until after a huge media and public outcry that the investigating unit looking into this case reopened its investigation and finally brought charges against “one” officer.

There is little doubt that the same type of “code” exists in the National Hockey League. Most of the talk after Lemieux’s comments was not about the content of what he said (that there is too much violence in the game and that the punishment for this violence is not substantial enough) but rather focused on the speaker himself. He was called a hypocrite for denouncing violence in the game when the team he owns has a “goon” of its own whom has been a “serial violent offender” on the ice. They said that as a former player he should not speak so negatively about the game that gave him so much fame and fortune. These, of course, are ridiculous counterarguments and completely ignore the problem. Lemieux is not the problem. The problem is the detrimental mindset of the players, management and owners. It’s the attitude that fighting has always been “part of the game” and it’s “what the fans want to see”. The problem is the idea that hockey insiders can’t speak out about the violence that’s turned the sport into little more than UFC (Ultimate Fighting Championship) on ice.

This year, head shots and fighting resulted in countless injuries and suspensions and even threatened the careers of two of the NHL’s star players, Sidney Crosby and Marc Savard. But no one is speaking out, except Lemieux. It’s difficult to change attitudes and go against the “old boys club”, but change is just plain necessary. If top management and ownership were on board, the culture of hockey would change easily, but they’re not. There’s no fighting in Olympic hockey, the rules won’t allow it. Even the NFL (the best run sports organization in the world in my opinion) changed their rules this year mid-season to diminish violent head hits.  Where there’s a will for change, change will happen.

It’s my feeling that hockey, when played fast and aggressively (without illegal head shots, checking and holding) is the most beautifully played game in the world. It doesn’t need fighting to draw fans, it needs leadership that allows the game to be played the way it was meant to be played. It took courage for Mario Lemieux to speak out. He knew he’d become the target of ridicule, and as a result he’s spoken out alone. Unfortunately his singular voice and message was too faint to be heard.