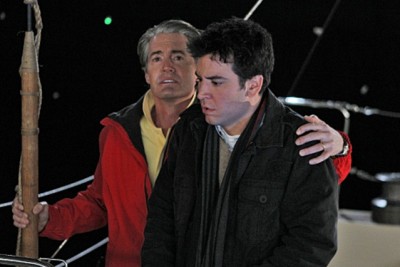 The Twin Peaks star’s presence can make almost any film or TV show better. Since his iconic show went off the air in 1991, MacLachlan has mostly filled the role of “that guy who’s in everything”, creating some of the most memorable television roles in recent history.

His was one of my favourite long term romance stories on Sex and the City. As Trey, Charlotte’s first husband, MacLachlan was Mr. Perfect. With that comically perfect hair, impossibly chiseled jaw and classic movie star voice, MacLachlan reads as that guy that Charlotte knows from fairy tales. Add that Trey was a rich doctor from a good family and Charlotte’s found the perfect man she’s been holding out for, the one she wants. Add a little erectile dysfunction, some serious mom issues and general emotional ineptitude and Trey is everything Charlotte doesn’t need. That was what was so great about it. Trey was everything she was looking for and was one of the biggest let downs in her 6 season run. Harry, on the other hand (husband number 2), wasn’t anything like what she wanted, he was nothing like the perfect Trey, so he ended up being perfect for Charlotte. Kyle MacLachlan was the key to that dichotomy in Trey. His particular brand of off-kilter perfection told us everything we needed to know about Charlotte.

Then there’s the brilliant Orson Hodge. Bree’s dentist husband on Desperate Housewives was simultaneously creepy and disarming, trustworthy and malicious, sympathetic and psychopathic, abused and abusive. And MacLachlan managed to play all those things in a single shot. Over 6 seasons we learned a lot about Orson and understood almost nothing about him, except whatever MacLachlan decided to give the camera that week… and with Orson, that could have been anything.

Finally, this week’s How I Met Your Mother capped his wonderful arc as The Captain, Zoe’s ex-husband and Ted’s feared “friend”. MacLachlan played The Captain with a lot of sympathy and humanity, as a lonely guy desperate for love, friendship and someone to share his boat with. Use that bizarrely handsome, threateningly regal thing the actor has going for him and filter the character that through Ted’s self-centered, romantic and overly dramatic eyes and The Captain is a threatening nemesis who is likely to kill Ted for stealing his woman.  It was pretty brilliant, and no one could have pulled off that part better than Kyle MacLachlan.

Top it all off with his fantastically controlled performance as Claudius in Michael Almereyda’s crazy, modern Hamlet film and MacLachlan is officially one of my favourite actors in the business.