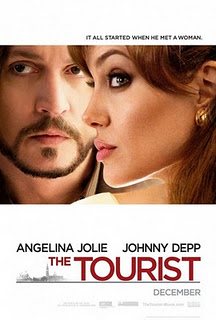 It really is a shame that The Golden Globes, one of the only major award shows that makes a point of acknowledging comedies and musicals, often does such a bad job of it. Academy pretension will most likely keep talented comedy actors like Emma Stone out of the Oscar race, so The Globes is where they are allowed to shine. But the accomplishments of such oft-overlooked achievers are degraded when voters lump them in with less deserving but bigger-name stars just to fill up the categories. E online (among others) has been swiping freely at 2 contenders in particular: The Tourist and Burlesque. One is an over-the-top, nominated-in-the-wrong-category badly executed snooze fest that clearly was nominated to get the star count up. The other isn’t actually all that bad.

The setting’s nice, the costumes are pretty and I like Paul Bettany (mostly out of residual love from A Beautiful Mind and A Knight’s Tale), but that’s it. The 2 superstars at the centre of the movie are just that, superstars, not actors. Which is particularly sad because both (especially Johnny) are quite capable of acting circles around so many others. Their complete lack of chemistry is almost alarming and to say the writing was pedantic is the biggest understatement since calling the horrifyingly obvious twist ending merely “unenlightened”.

The Tourist is a big-budget, big-stars waste of time. It also in no way qualifies as either a musical or a comedy and yet somehow was nominated as one. But hey, it’ll put some more famous faces on the red carpet.

The seemingly showy musical, on the other hand, lacks the self-important grandiosity of The Tourist. For all its sequins and glitter, Burlesque possesses an almost self-deprecating simplicity and is no worse off for it.

Unlike last year’s glitzy musical Nine, Burlesque sports a cast of oft-mocked, remarkably talented folks instead of Oscar winners and their pal autotune. Perfectly cast, Cher’s identity as a somewhat has-been but still utterly fabulous icon lends a brilliant melancholy to her character, a trod-upon diva too tough to acknowledge defeat and too passionate to back down. Her musical number “You Haven’t Seen the Last of Me” is an aching anthem of “this is Cher’s world, you’re just watching it” diva-ness. And speaking of divas, there has never been, nor will there ever be anyone quite like Christina. Other than the aforementioned ballad, the film’s songs are generally uninspired, but in the hands of the definitive beltress, they shake the floorboards. The pint-sized fireball raises the standard ingenue-with-a-dream character to new heights, not with outstanding acting, but by giving her the voice that makes her deserving of that dream.

The writing is pretty rocky, but the film is well-paced and the audience too entertained to care. The romance storyline is well-developed, aided in no small part by the crazy chemistry between Christina and Cam Gigandet (who somehow manages to come off as trustworthy despite his perfect abs and guy-liner). Stanley Tucci also adds some cred to the film with his wonderful role as Cher’s best friend (but I’ve never not loved Tucci, including that time last year when he played a serial killer).

But it’s the idea that this cast needs extra cred that I think is a problem. True, Christina is not an actress, but the role really requires a singer, and no one’s better than her. Cher, however many years ago it may have been, is an Oscar-winning actress. Alan Cumming and Peter Gallagher are respected Broadway performers. Julianne Hough and Chelsea Traille are some of the brightest dancing talents in North America (and Hough’s presence lends a fun irony to a tongue-in-cheek Dancing with the Stars joke). Gigandet is just plain good in the role, who cares if he was once on The OC or had a part in Twilight. The rest of the excellent cast is filled out by actors whose biggest crime is that they work predominantly in TV: the always-great Eric Dane from Grey’s Anatomy, Kristen Bell (one of television’s great heroines as Veronica Mars, whose been slumming it in her last few films), the charming Glee star Dianna Agron, even the lesser-known David Walton (100 Questions) makes his mark on the film. The cast of Burlesque truly is excellent, they’re just not “movie stars”.

Don’t get me wrong, I don’t think Burlesque is the greatest film of the year, I don’t even think it’s close. But it is underrated. It’s not even close to bad. It’s entertaining, decently executed and shows off some really talented people. It’s a solid movie musical and deserves not to be laughed at for being nominated as such. It’s at least better than Mamma Mia!, but that had bigger stars- I’m just saying.