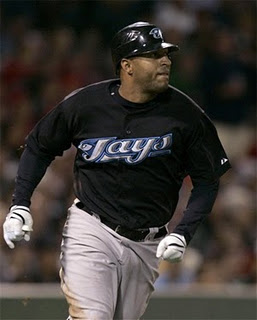 Thoughts on the Vernon Wells Trade

To be sure, this is a salary dump. Napoli and Rivera together will cost the Jays approximately $11 million this year versus $23 million for Wells. After that, Napoli will have one more season of arbitration eligibility which will result in a salary range of $6 to 8 million; Rivera will be a free agent and off the books. This results in a total salary savings of about $68 million over the course of Wells’ contract.

Anthopoulos, in his post trade interviews, admitted that financial considerations where a major factor in making this trade. What this means is that he has more financial flexibility to sign two of his young pitchers, Brandon Morrow and Brent Cecil to long term contracts. If we use the contract negotiated with Ricky Romero last summer as a template ($30.1 million over the next 5 years) then theoretically he could sign both these promising pitchers for the amount saved by trading Wells. Smart?? It is if you’re an accountant for Rogers Communications (who own the Jays). But, in my opinion, it’s not so smart if you’re trying to build a team to compete in 3-5 years, the very thing Antropoulos has been touting as his principal goal since he was named General Manager little over a year ago.

Napoli and Rivera are solid, but neither are All-Star-quality position players. They do give the Jays’ manager John Farrell more lineup flexibility and depth, which is important… if you’re trying to be a contender THIS year. But that’s not Anthopoulos’ supposed goal; if it was, he wouldn’t have traded Shaun Marcum for a prospect who’s at least 1-2 years away from making the team. Anthopoulos compromised himself with this trade to meet budget constraints. In doing so, he’s weakened his team this year AND lost an opportunity to continually build the Jays for the future.

Let me explain. First of all, the Jays are weaker this year without Wells in centre field and the middle of the lineup. Second, by trading him for 2 established-but-not-extraordinary major leaguers rather than for 1 of the Angels’ top prospects, he lost an opportunity to strengthen his club in the long-term. Anthopoulos has stated that his goal is to build his team for the future, so that he has a potential All Star at each position. This trade does not accomplish that.

If it is true (and I suspect it is since Anthopoulos has been very honest in his interviews in the past) that the Angels and other teams pursued Wells “aggressively”, then it makes sense that the Angels, or another team, would have been willing to give up 1 of their top prospects to acquire him. This would have weakened the Blue Jays this year for sure, but it would have resulted in increased salary savings and a bigger upside in the future.

Alex Anthopoulos has built up a lot of goodwill with the Blue Jays fan base in the short time that he’s been GM. He’s made a lot of shrewd deals and, to his credit, seems to approach many of his trades and signings like a chess master thinking 3 or 4 moves ahead.

Unfortunately, I don’t see that potential with this trade. It’s difficult to believe that any team, near the trade deadline, would be willing to give up a top minor league prospect for either Napoli or Rivera. However, let’s cut the guy some slack, it’s possible that Anthopoulos is considering his willingness to trade top catching prospect, J.P. Arencibia (who is major league ready) for a top-line minor league prospect who’s 2-3 years away from the big leagues. He did this last year when he sent Brett Wallace to Houston in exchange for Anthony Gose, who’s still 1-2 years away from being major league material. I’ve always suspected Anthopolos wasn’t convinced Arencibia would be the Blues Jays’ future catcher. The Jays are strong in the minors with catching prospects Travis d’Arnaud (double A) and Carlos Perez (high single A). Naploi gives him the flexibility to make this type of trade.

Anthopoulos has earned my respect so far, and you can never truly predict how any trade will work out.  But, until proven otherwise, I’m convinced this trade, was made solely to strengthen the organization’s financial bottom line, rather than strengthening the actual team now or in the future.