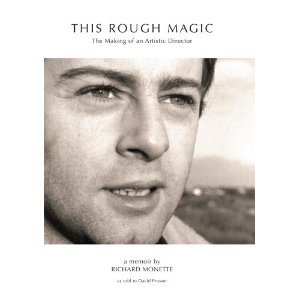 The longest-tenured Artistic Director in the history of The Stratford Shakespeare Festival was an eccentric former actor famous for temper tantrums and stage fright. As a director, he staged some of the most popular productions the festival ever housed. In his 14 seasons in charge, he opened the new studio theatre, started the Birmingham conservatory and brought the festival completely out of the red.

This Rough Magic tells the story of how Richard Monette got there.

If you can make it through the somewhat tedious early years account, the material reading almost as an excuse for any bratty behaviour that might follow, the memoir quickly becomes a deliciously interesting read. For any theatre buff, and especially Stratford patrons, This Rough Magic is a fascinating first-person account of the life of one of the festival’s most intriguing personalities.

From his 19-year-old performance as Hamlet through his breakout role in Michel Tremblay’s Hosanna to his diva-esque quest for the part of Romeo and his decision to briefly trade in Shakespeare to perform naked in the original cast of Oh! Calcutta!, Monette gets down to the nitty gritty details of his life in the theatre, whether it makes him look good or not.

Telling the tragic story of his love affair with the recently-deceased Domini Blythe, his subsequent coming out of the closet and the lonely years that followed- the memoir is, at times, a very touching human story. At others, it is a rambunctious tale of a narcissistic megalomaniac who often seems to have been much of the inspiration for the character of crazypants Darren Nichols in the television show based on the festival, Slings and Arrows.

Intimate stories populated by legends like William Hutt and Maggie Smith fill many of the pages, including the account of his first moments on the world-famous festival stage when Hutt, often considered the greatest actor in national history, greeted him with the words “welcome home”.

The more you know and love the festival the more fascinating this book becomes. The more you know about classical theatre, the faster you’ll want to turn the pages. But for any theatre fan at all, This Rough Magic is truly a memoir not to be missed.