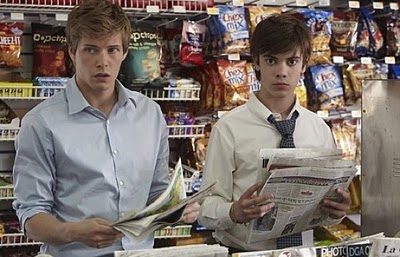 The Evolution of Weeds

The strange story that is Weeds doesn’t make a lot of sense. It’s oddly popular though almost no one thinks it’s very good any more; only a couple of the original cast members remain but the show insists on chugging along; the central character is the most loathsome that perhaps I’ve ever seen on TV and the show about the drug dealer has precious little to do with drugs anymore. It’s a strange phenomenon, Weeds. Most interesting is its journey from big-hearted suburban parody to gritty road comedy and how the sweet kid on the soccer team became a killer and his snotty team became the grown-up.

In early seasons, Nancy was redeemable. Or at least tolerable. Sure, her sexual style was always a little bit rape-y, and yes she always had that strange drunk-seeming thing about her and by-god she never was a very good mother. But in early seasons at least she was a slightly less terrible human being. Time was when Nancy was a heavily flawed but decent person who made bad decisions and didn’t know how to dig herself out. But quickly, very quickly, she lost all credibility and the show just dragged along behind her on her path of self-destruction. As a character study it’s sort of interesting, but it’s hell to watch and I’d be a lot more interested if she seemed a little more consistent.

But in seasons 1-3 it didn’t really matter what you thought of Nancy. Two words: Celia, Conrad. They made the show. As interesting, layered, engaging characters, Celia and Conrad held down the show’s claim to legitimate character writing. Joined by a then-significantly-better-written Doug, the sometimes-fun Dean, always-awesome Heylia, excellent Isabelle and hilarious Sanjay, Celia and Conrad anchored a pretty solid supporting cast- then the writers burned the city down. Literally. Season 3 sends by cutting ties to some of the best characters (Heylia, Conrad and crew) and moving away from the town that gave the show it’s underlying themes of trapped conformity and small rebellion. Gone too was the theme song that went hand in hand with those themes: the ironically ever-changing “Little Boxes”.

Next came 2 seasons of dirty, gritty, unpleasantness involving Mexican gangsters. So that was fun. Not really. Nancy got grosser, the themes were smashed to pieces and pressure fell to the 3 men at the centre of Nancy’s life to pick up the pieces of the floundering show.

Andy, Silas and Shane have consistently been intriguing aspects of the show. Andy from day one was a fan favourite and to this day maintains that status. The wonderful Justin Kirk’s brilliant timing and underlying acting chops make him the most solid player on the team- every single time the writers have thrown him the ball he’s touched base. Andy’s arc of responsibility, his misguided yet unflinching loyalty, his oddly seated yet totally relatable insecurities, they all make him one of the truly great characters on TV.

Shane, similarly, has always been interesting. At first he was the innocent heart and sometimes comic relief, being too young to be much of anything else. Then at the end of season 5 his murders someone with a croquet mallet. In a rare feat of television writing, Shane’s path from one to the other is both traceable and subtle. His was a slow spiral that almost seemed masked by maturity unless you allowed yourself the luxury of acknowledging the darkness in his words (something that you really just don’t want to do when watching a show about Mexican drug lords- you want to hold on to sweet little Shane). The kid who played the voice of Nemo (as in the cartoon fish who needed to be found), Alexander Gould, has held down the most complex narrative in the series, and he’s done it with brilliant gravitas.

Silas was a little trickier. Early on he read as little more than eye candy, the token moody teen sent to make Nancy’s life miserable and deliver on the young girl demographic a show about weed might not otherwise attract. But Hunter Parrish pulled Silas up to the point where his abs became incidental. In the dreariest moments of the dreariest of seasons (4 and 5), Silas was funny and engaging and actually someone one might want to root for (a VERY rare thing in Weeds). By season 6 he’s firmly the only adult in the show, the most stand-up, the guy with the lightest shade of gray.

Season 6 was a fun pick-me-up from seasons 4 and 5. It still lacked the thematic punch of the early stuff but being on the run did these characters some good. At the very least it got them out of Mexico/California, which was highly essential to my sanity. The characters and their journey as seen through the eyes of the reporter introduced late in the season added a really interesting element. It was refreshing to hear descriptors thrown at Nancy in the form of an adjective cloud, every person in her life’s opinion summed up in a top 5 list that kicked off with “manipulative” and ended with “bitch”. Even more excellent was the comparison of Shane vs. Silas. Shane was a kid, Silas a temperamental, problematic teenager, but the dangerous words surrounding Shane were no where near Silas- nice is, after all, different than good.

As season 6 ended, the finale brought some truly great moments. First there was Silas saying goodbye by playing the big brother card, telling Shane to stop acting like he was dead inside because he didn’t believe that he was, and he knew his kid brother would miss him. His parting words of  “please, PLEASE, choose to not be a dick” perfectly encapsulated the character’s unlikely hero identity. His showing up at the airport, final goodbye to his mother, going without a fight and silent tears on the plane further prove my point. Andy had some brilliant stuff too. His reluctance to implement the “Plan C” that both sacrificed and saved Nancy’s life at the end was wonderful. His contribution to that excellent goodbye scene in the garage (“I’m saying goodbye to my nephew, who I may never see again”) was also breathtaking (god Kirk is good isn’t he?). Even with the show so far off the track they set with the premise, the season finale was really pretty great (I even grew to like Richard Dreyfus’ bizarro math teacher character). The consequences of Shane’s dark side were unexpected but fascinating in season 6, Andy really showed a lot of growth and Silas continues to hold down the likable fort of unlikely heroics. And I’m looking forward to the 7th, and probably final, season.