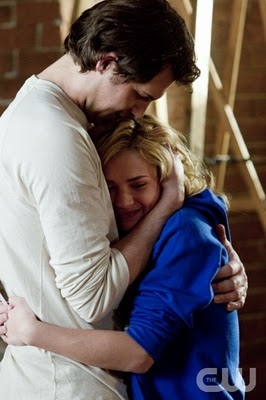 The End of Life (Unexpected)

The interesting thing about the end of Life Unexpected is how very expected it was. The sweet show that would have fit perfectly on The WB never made much sense for The CW- the teenagers looked like teenagers, there were actual adults, it was more heart than sex organ. And though Tuesday’s 2-hour offering was labeled a “season finale”, everyone knows it was really a farewell to the lovely if short-lived show.

The first hour wrapped up the season’s stories: we said farewell to Erik exactly as we should have, though I was perplexed at how fond I’d grown of him, and Emma’s story was wrapped. The latter was less interesting, a bit of a character-under-the-bus issue, but the scenes with Baze and Sam were sweet.

The last hour was the series finale. It brought the focus back to the central grouping of Lux, Baze, Kate and Ryan. Some excellent Ryan moments saved the parent story from the annoying monster that is Kate, and Jones came back for an excellent scene that finally said what I’ve always believed: Jones is awesome, and not “normal”. Thank god for a show that finally acknowledges that it’s not just the “weird” protagonists that have stuff to deal with, it’s the golden boys too, and everyone in between. Ryan fought for her so “Morning Madness with Kate and Ryan” returned to the radio with a sweet full circle banter session and Baze took back his bar (about time).

The final couple scenes got a little schmoopy with the “I love you” exposition and the would-be cliffhanger annoyed me at first. But I loved flashing forward 2 years to Lux’s graduation. The easy resolution of the cliffhanger was nice to see, instead of being left with the trademark ambiguous ending of a show that’s not sure if its canceled or not. Though the happily-ever-afters got a little tedious, I was happy to see the characters happy and Lux’s speech was lovely (though she completely misused the concept of lightyears- they’re space, not time). Math and Erica…er…Alice is a cute if convenient pairing, as is Fern and that other guy who was always around. I liked that Jones is still in Lux’s life though I wish he had stayed with Tasha instead of ending up with Lux (I get the poetry of her feeling like she deserves the stable nice guy, but I feel bad for Tasha, she deserves that too- possibly more, Lux be kinda crazy). As for the parental pairings, my favourite part of Lux’s speech is when she indirectly thanked Ryan for never leaving her (Ryan was consistently my favourite character in the show, I loved his unconditional person-to-fall-back-on-ness), I loved that he sticked around. Not so sure about him marrying the random lady with his baby but he was always too good for Kate so actually I’m okay with it. And Kate and Baze. Well, duh, I guess, is the only word to really describe it. It was obvious, a little uninspired but the direction the show was always going so fine. I don’t actually like them together but it’s fine. Is it weird that I secretly hope now that she’s 18 that Lux goes and finds Erik? Yeah, that’s weird. Fine, she can steal Jones from her best friend, fine (not fine).

I seem to be complaining a lot, I know, but I really did like the finale. I even cried (in that Ryan part, I love Ryan). Life Unexpected was a sweet show and (like Ryan for Kate) it was too good for The CW, that’s why it’s over. Poor Kristoffer Polaha’s streak of good-but-canceled shows continues, he’s so charming, why can’t he catch a break?. This one will leave a big hole for that good kid demographic who finds nothing to relate to in Gossip Girl, a hole The CW will undoubtedly try to fill with vampires. Needles to say, Life Unexpected will be missed.