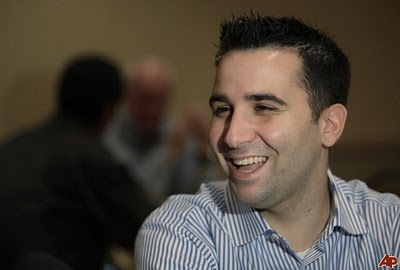 Less than a week after the blockbuster trade of Vernon Wells, Blue Jays GM Alex Anthopoulos (whom I’m now dubbing “the chess master”) was at it again. This time he flipped newly acquired Catcher/1st Basement/DH Mike Napoli to the Texas Rangers for relief pitcher Frank Francisco (6-4, 3.76 ERA, 2 saves in 56 relief appearances) and cash. This trade, though surprising, was not completely unexpected. A chess master is always looking a few moves ahead, something Anthopoulos proved yet again to be one of his strongpoints in his news conference this week after the Francisco trade. Knowing that there had been a number of clubs contacting the Angels about Napoli’s availability before the Jays acquired him, Anthopoulos made the trade for Napoli with the possibility of another one never far from his mind.

Anthopoulos has made it his mission to protect his young starting rotation from physical burnout and emotional frustration. Last year, the Jays implemented two strategies to physically protect their starters. The first was a ceiling on pitchcount (a starter generally threw no more than 100-110 pitches a game). The second, was limiting the number of innings they would pitch for the season (that’s why they shut down Brandon Morrow last September, he reached a pre-determined number of innings for the season).

This year, Anthopoulos has made moves to alleviate the stress of blown save opportunities: he’s rebuilt his bull pen. First, he let closer Kevin Gregg and left hand specialist Scott Downs go as free agents to collect draft picks and save money (The Blue Jays now have 8 of the first 80 picks in this year’s entry draft). Next, he’s traded for and signed a slew of veteran relievers with closing experience: Octavio Dotel (37, 3-4, 4.08 ERA, 22/28 saves, 75 Ks in 64 innings), Jon Rouch (32, 3-1 3.12 ERA, 21/25 saves, 46 Ks in 57 innings), as well as Francisco. Though none of them are “the closer” all true post-season contenders must have, they do give 1st year manager John Farrell some depth to play with in the pen.

Rouch and Francisco are especially interesting acquisitions. Last year Rouch started as the Minnesota Twins’ closer after their premier closer Joe Nathan had season-ending elbow surgery. Rouch did pretty well and that experience should add to his effectiveness this year. Francisco is even more interesting. He was “the closer” for Texas in 2009 and posted 25 saves in 29 opportunities. Though he lost his closer position in 2010 to AL Rookie of the Year Alex Feliz, he is a proven major league closer. An added bonus is Francisco’s effectiveness against left handed batters. Last year, lefties only batted .205 against him and over the course of his career he has held them to a very respectable .215 average. This will complement and relieve some of the load on the Jays left handed specialist David Purcey.

Anthopoulos has also acquired a number of other proven middle inning relievers such as Carlos Villanuva (who had 67 K’s in 52 innings last year). There are holdovers from last year’s team; Casey Janssen, Shawn Camp, Jason Frasor, Josh Roenicke, and Jesse Carlson, as well, as lefty Jo Jo Reyes, (acquired in the Escarbar trade) and Chad Cordero (who is returning from shoulder surgery but posted 47 saves in 2005 with the Washington Nationals).

Though that most sought-after commodity “the closer” remains elusive, the chess master has strengthened and added depth to the Blue Jays bullpen,  something that will definitely serve the team well over the marathon 162-game season. The Francisco trade is just one more example of Anthopulos thinking ahead to fill a void and protect his most-prized asset, his young and talented starting pitching.

Looking ahead, I have to think that Anthopoulos is going to address the third base position next; I think he’d prefer to keep Jose Bautista in right field. Stay tuned, there is surely more to come from The Chess Master.