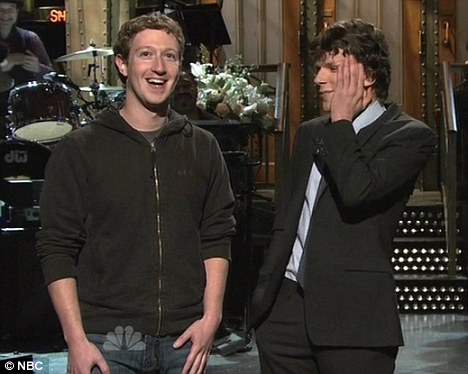 Not only was the best part of last night’s Saturday Night Liveclearly the awkwardly fantastic interactions between Mark Zuckerberg, “MARK ZUCKERBERG” (Andy Samberg), and Jesse Eisenberg during the latter’s opening monologue, but check out the ending when Eisenberg ends the show and then he and Zuckerberg stand there awkwardly, proving once and forevermore just how perfect Jesse Eisenberg was for that role to begin with.

(Oh yeah, Eisenberg was also a wonderfully game and energetic host who added to every sketch he was in, whether by choking out the line “and the mouth came from a hoe who did not know her place” or joining in on Andy Samberg’s desperate plea that the pair of them took a pill, and that’s why their penises are so small)