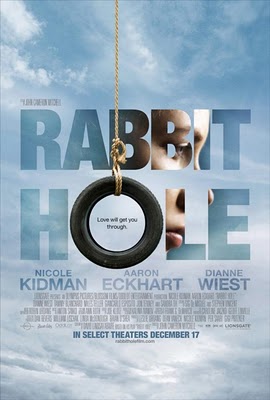 The new film adaptation of the Pulitzer Prize/Tony-winning play Rabbit Hole has gotten some excellent reviews. If I were watching this film as an original story, who knows, I might agree with them. But as an adaptation of the remarkable play I saw just a few months ago, the film of Rabbit Hole is but a shadow of what it could be.

At a basic level, the screenplay adaptation by playwright David Lindsay Abaire undermines the story in its attempt to broaden it to fit the new medium. Updates like the footage of Danny being on his father’s phone instead of on videotape seem like good ideas for modern believability but it lessened the significance of the moment. It’s not really possible to delete a video from a phone unless you view it first or go looking for it with the express purpose of deleting it. Becca’s insistence that she just made a phone call makes it seem like she’s lying, she deleted it on purpose. The loss of ambiguity and supposition of guilt takes away from her character.

Glimpses inside the grief support group are a good addition but should have been played a bit funnier- in keeping with the darkly comic undertones of the original play. I like the inclusion of Auggie, that’s the only change I think really adds much of anything. Sandra Oh’s character is interesting as a character in herself (I like the idea of a character as a possible version of Becca and Howie a few years further down the line) but the consequences of her storyline with Howie do nothing to deepen his character.

But it’s the rearranging of Becca’s relationship with Jason that is perhaps the most disappointing of the major script changes. One of my favourite parts of the play, the reading of Jason’s letter to Becca, is understandably eliminated (letters are hard on screen), but I think it’s really important to Jason’s character to have him be the one to make contact, not Becca. As it plays in the film, the development of their relationship is far more clandestine than it needs to be. It seems almost inappropriate, stalker-ish. Becca’s unexpected path in dealing with grief seems more wrong than different in the film when a major aspect of the play is that there is no wrong way to grieve.

But many of the original lines do remain, including my favourite speech, where Nat tells Becca that eventually the grief will become something she can live with, carry around like a brick in her pocket. And even with some undermining changes, a good story is a good story.

However, the casting of the film is truly perplexing. Miles Teller is an okay Jason and Tammy Blanchard is just fine as Izzy. Neither is particularly inspiring, which is depressing in itself, but they’re not bad either. Neither is Diane Wiest as Nat. She’s a bit whiny at times and perhaps too soft-spoken for an out-spoken character but she does a fine job with her pivotal speech.

What bothers me about Aaron Eckhart in the role of Howie is that as much as I convince myself that he really is a good actor, I hardly ever believe in him (other than his perfect turn as Harvey Dent). His jaw is too square, his biceps too big, his hair too perfect; he just sort of looks like a Ken doll. He plays as too perfect, too strong. The over-the-top scene in which he yells at Jason for entering their house is scary, less because he seems to be cracking his perfect demeanor and more because he evokes an army drill sergeant. Eckhart plays the more tender moments better, but overall just seems like a strange choice.

But the real heart of the piece is Becca, a terribly complex character who can be no less than admirable and no more than aggravating. She has to be a boiling pot of troubles that aren’t allowed to reach a boil. She has to be defensive and over-compensating and neurotic and never anything other than deserving of pathos. But Nicole Kidman can’t do that. I really just don’t think she can. She always looks like she’s acting, not being. And even in her best moments she seems cold, not in a distanced-person-who-suffered-a-great-loss way, in a “I’m afraid of your germs, keep your distance” way. I don’t buy Nicole Kidman as a mother (which is weird because I know she is one), nor is there really any connection between her and the other characters (not even Jason, with whom Becca’s inexplicable connection is a crux of the piece). I know she’s an Oscar-winner and considered a great actress, but Becca’s an unmistakably human, empathetic, complicated character and I just think that casting the star of Stepford Wives was a mistake. That sounded harsh. Here’s the thing: Nicole Kidman is very very good at some things, this is not it. And it is predictably not it. And the casting director should have known that. And Rabbit Hole without Becca isn’t much at all.