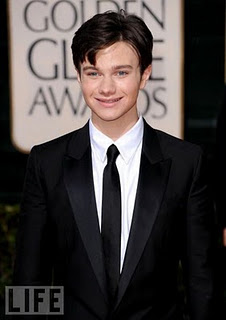 Quote of the Show

Sunday’s Golden Globes contained no small number of witty shots at any and all celebrities in attendance, some great speeches and some deserving winners (the most obvious of the bunch: Aaron Sorkin, Paul Giamatti and Christian Bale, are among my favourites)  but perhaps my favourite moment was provided by Chris Colfer.

Glee’s greatest asset, Colfer’s been handed the season of a lifetime by the writers who’ve been highlighting his character Kurt specifically lately, especially as the stats on gay teen suicide keep mounting. Colfer’s elevated the uneven material beautifully and though he may not actually be the greatest supporting actor on TV, he’s definitely the most deserving nominee and I was very happy to see him win. I was even happier to see the reactions of his cast-mates at his table, they looked so proud (the usually obnoxious diva Lea Michele even cried for him, it was really kinda nice).

My favourite bit of the eloquent and remarkably calm speech he made after he opened with the sensational line: “I dropped my heart somewhere between Natalie Portman and Julianne Moore, if you find it please return it to me”? As he predictably (and appropriately) dedicated his win to the teenagers everywhere who’ve been bullied and told they’re not good enough, he capped with a triumphant “screw that” to the belittling as he raised his award in the air. It was a lovely testament to how to truly deal with bullies (the way that Kurt is slowly learning this season with a breakthrough in “Never Been Kissed”), don’t cry about it, sing sad songs or write out your feelings, say “screw that, you’re wrong and this doesn’t fly”.