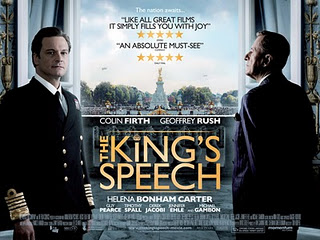 There are two distinctly British films playing in theatres right now. The King’s Speech, one of Oscar’s top contenders, is a formal high-art story about monarchy, duty and the pressure of expectation. Made in Dagenham is a scrappy, spirited, populist film about factory workers fighting for their rights. The former’s principle plot is centered on elocution; much of the dialogue in the latter is so colloquial that it’s hard to understand. Two more different accounts of the British experience are hard to imagine, but there is much more connecting them than their country of origin.

Both are technically very good films. They feature excellent performances from their leads (Colin Firth, for the second year in a row finally proving how great he’s always been, and Sally Hawkins, bringing her Happy-Go-Lucky pluck to a deeper role), strong supporting players (King‘s Geoffrey Rush and Dagenham‘s Miranda Richardson, among others), solid scripts and clever direction. Both are stories of overcoming adversity, about leadership, about standing up for yourself and what’s right. Both are true stories, centered on national political issues and are told somewhat cheekily. Both also suffer from some slow plotting and the occasional corny moment. But both overcome that easily.

Ultimately, The King’s Speech is the better movie. The performances are pitch-perfect, the script tighter, the direction more artistic and the story more unique and therefore compelling.  It’s plain and simple just a very good film and is deserving of much of the praise that’s been heaped on it. I’ll be annoyed if it sweeps all the major awards, but it certainly deserves some of them. In a year with tons of great films from the lofty King’s Speech to the underrated Dagenham, celebrating just one seems plainly wrong.