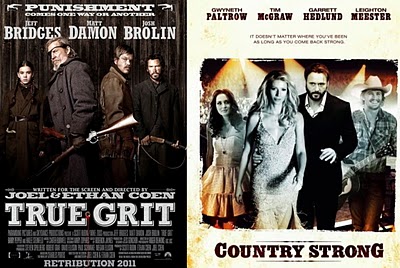 On The Western Front

First let me apologize for that title, it’s inexcusably bad. But I had to come up with an excuse to talk about The Coen Brothers’ grimy and excellent western True Grit in the same article as the melancholy story of a country western singer Country Strong, which I think is just as well executed, if not as showily artistic.

True Grit has been and will be getting lots of recognition by critics and award shows. Jeff Bridges will be nominated for things and the Coens will be invited to the Oscars- because they always are. Which is not to take anything away from their work on True Grit, it’s excellent work. The only Coen film I’ve ever really liked, True Grit is a brilliantly composed story of a girl trying to track down her father’s murderer, based on a novel by Charles Portis. The script is very well written, the film insightfully directed by the oft-lauded Coens and they deserve the awards they’ll get for this one.

But I’m not sold on Bridges. Last year’s Oscar winner does a fine job in the film, but his character lacks nuance, slipping into caricature at times, spitting and sprawling his way through the story. Compared to his wonderfully human performance in last year’s Crazy Heart, Bridges seems to me to not be at his very best in True Grit, and I certainly don’t think his character places him in the “leading actor” category, industry politics are the ones doing that.  Instead, I believe the praise should be falling where it hasn’t been quite as much. Hailee Steinfeld, whose only acknowledgement so far has been a SAG nomination for supporting actress, is the heart and soul of the film. Not only is she unquestioningly a leading actress not a supporting one (it’s her story), the 14 year old does a phenomenal job with an incredibly complex role. As the main character Mattie Ross, Steinfeld gives a remarkably mature performance that easily overshadows her Oscar-nominated/winning co-stars (Bridges, Matt Damon and Josh Brolin- all of whom really are very good in the film). The well-praised True Grit has somehow managed to house the most underrated performance of the year.

Country Strong, on the other hand, is getting overlooked on all counts. Here we have yet another instance of me disagreeing with the norm. With a rotten tomatoes score of only 17% and a Metascore of 44/100, consensus seems to be that Country Strong is pretty weak. But I disagree. I found it engaging. I think Gwyneth Paltrow does an exceptional job with a realistic horror show of a fallen-angel character (all-too familiar in this day and age) and the film tells an accessible, recognizable and interesting story. Supporting actors Tim McGraw, Garrett Hedlund and Leighton Meester are all excellent as well. Meester, in particular, surpasses expectations as an upstart singer. I expected her character to be a one-dimensional villain who would swoop in and push Paltrow’s Kelly Cantor out of the spotlight, and possibly steal her husband along the way.

I was delighted to find that Chiles (Meester) is much more interesting than that. They all are. No one is an archetype, they’re all wonderfully complexly gray. The music also fully surpasses expectations, working in 3 different styles of country music and performance and featuring extremely strong vocals from Paltrow, Meester and Hedlund. All four principal characters are equally compelling and well-executed in this well-told but simple story. Is it being overlooked because of the glittery guitar and the blond curls? Because I really think it’s a truly excellent film.