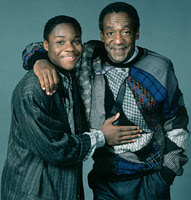 Joke of the Week

Malcolm Jamal Warner guest starred on Community this week. It was an okay episode, far from the best Community offering but still pretty good. But in a particularly Abed-light episode, the best joke of the week capitalized on his TV history-heavy humour without even putting him in the scene. Take a look at that sweater Warner’s wearing in the photo. Recognize the style? Late in the episode Jeff compliments it and Warner replies “thanks, my dad gave it to me”.

Malcolm Jamal Warner is Theo Huxtable. From The Cosby Show. If you’re still not following, please give up now. Otherwise, here’s an oldschool photo of him and his famous TV dad in one of HIS famous TV sweaters.