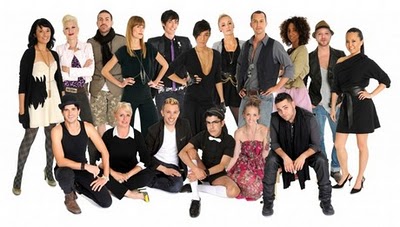 2010 was a very good year for Runway. Of course I have no idea whether it was a good year for the actual runway, as in the fashion industry, but even my non-fashion-savvy self can recognize a solid couple seasons for Lifetime’s reality show.

January brought the premiere of Season 7, aka Seth Aaron Season. The charismatic designer took the reigns episode one and was fan favourite the whole way to the win. Likable characters Anthony and Jonathan further spiced up the season, but boring divas Mila, Maya and Jay put a serious damper on things. Cocky runner-up Emilio was the season’s obligatory “I don’t care what Tim thinks, I do MY clothes” guy, in the most annoying way possible. And then there was Ping, the bewildering “designer” who went out third (I still can’t believe she made it that far). It actually wasn’t that great a lot of designers personality-wise, though I thought they were a very talented group (Amy, in particular, didn’t stick around nearly long enough). But Seth Aaron was so much fun that he carried the season almost single-handedly.

The people giving him the most assistance in his quest to keep us tuned in were actually the models. In the second season of great-idea companion series Models of the Runway, the maturity gap was delightfully wide. There were the comically bitter “seasoned” models like stoic Brandise and snarky Cerri and their endearing comrades Seth Aaron-devotees Valeria and Kristina. On the less-tolerable side of things there was “I’m here to win, not to make friends” Alexis and her partners in immaturity, mean girls Lorena and Brittany. Charming Monique and Holly the Amazon made up a solid middle ground of normalcy. The models were consistently entertaining personalities, elevating the character drama of a talent-heavy but (Seth Aaron and Anthony excepted) dry season.

Season 8 was filled with a lot more personalities, and just as much talent, but unlike season 7’s perfect ending, it’s better to pretend that season 8 ends with the fashion week shows. This season’s fan favourite, a phenomenally talented quirk ball called Mondo, didn’t start out as a favourite at all. He was strange, quiet, out of place. Stronger personalities like boring “I swear I’m not a villain” Gretchen and full-fledged villain Ivy overshadowed him. Then he won 3 challenges in a row, was the first person to be nice to belittled underdog Michael C, and revealed a heartrending personal story of acceptance and perseverance on air. When he didn’t win the season, the already-hugely-popular designer became the martyrous symbol for under-appreciated creativity. There was sadly no Models of the Runway this season, but the personalities in the workroom didn’t need it. From quirky mama bear Peach to the eccentric and dramatic Casanova who made beautiful clothing that only sometimes dipped into either  grandma or slut territory, to moody “artist” April to the cunning yet downtrodden Michael C who infuriated the others by winning a lot, to adorable Christopher, to fun Michael D, to annoying “she’s an Asian warrior- get it?!” Andy, to evil incarnate Ivy- the designers of season 8 were fantastic to watch. We just have to ignore the ending.