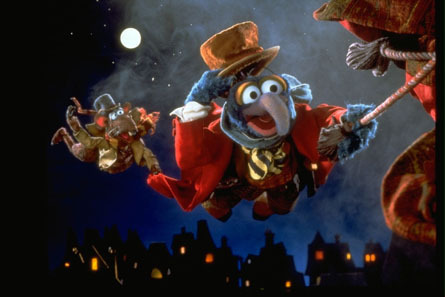 Tis (a little after) The Season: Slightly Delayed Installment

When I think of Christmas, there is no image more indelibly burned into my brain than that of my whole family gathered together on the couch watching The Muppet Christmas Carol. It is a pop culture ritual unparalleled in my existence. Sure, we often turn on It’s a Wonderful Life, or flip through the never ending marathon of A Christmas Story. I’ve even recently started insisting on starting the season with a viewing of Love Actually. But The Muppet’s Christmas Carol is an absolute necessity to the yuletide. I’m not sure where the tradition started, or when we all realized that it was so important, but I do know that every year since I could remember has found all four of us watching Michael Caine, Kermit the Frog, Gonzo (pardon me, Charles Dickens), and Rizzo make their way through the classic tale.

As such, I don’t necessarily feel that I can review the movie with anything resembling journalistic objectivity. But such is the curse of the Christmas movie- a really well done one tends to melt the cynical cocoon of even the most hardened reviewers hearts.

The Muppets Christmas Carol is not only a great rendering of the classic tale (over on Cinematical, they recently confirmed my secret suspicion that it’s actually one of the more faithful adaptations of the story) but it’s also a very funny muppets movie, catering (as those muppets are wont to do) to children of all ages. As such, mixing the familiarity and comfort of the muppets with the well-worn tropes of A Christmas Carol leads to something that feels at once timeless and familiar.

In the end, The Muppets Christmas Carol is MY favorite Christmas movie, but since I think that’s as arbitrary and personal as asking what one’s favorite color is *, I’m curious: what’s yours? What movie has stuck in your brain with all the staying power of Rizzo and Gonzo clinging onto Scrooge’s leg?

*Mine is blue, and if you think anything else, you’re wrong.