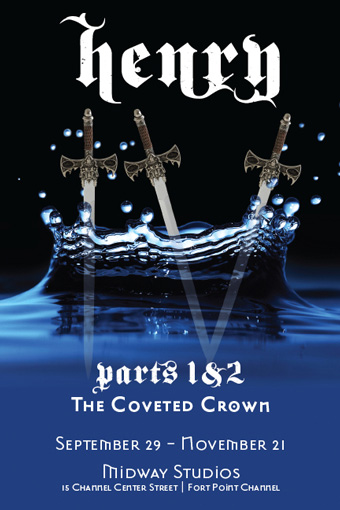 The Actor’s Shakespeare Project’s Coveted Crown begins and ends each piece of the puzzle with a song. The fabulous Bobbie Steinbach, armed with a tambourine and the acoustic backup of the humming ensemble, tells us everything we need to know going into the prologue (excerpts from Richard II, starring the sometimes affected/sometimes effective Marya Lowry).

Steinbach serves as our guide of sorts through the action of Richard II, Henry IV parts 1 and 2 and the epilogue from Henry V. The epic double-header can be a chore at times but the capable company and innovative sense of place made for an ultimately pretty fantastic set of productions.

Director Patrick Swanson together with designers Jason Ries, Seth Bodie and Scott Clyve, constructed a world suspended in time and space- somehow a part of both now and then, both here and there. The base costume (shared by most of the ensemble as well as the runners) of modern military jacket and boots reinforced the idea that even in times of peace, the crown was always somehow at war. The cleverly-designed stage allowed the audience to literally see the story from two sides- front and back, right and left, Hotspur and Hal, Eastcheap and the palace, etc. The transitions were smooth, the blocking effective, and though double casting was sometimes distracting (Michael Forden Walker and Risher Reddick were onstage as someone new every 2 minutes it seemed), the small ensemble filled out the giant world of the plays quite nicely.

Bill Barclay’s Prince Hal (aka Henry V) had moments of brilliance (particularly towards the end of Part 2) and was generally impressive, but I wasn’t drawn to him like perhaps I should have been. He seemed sometimes a tad too exuberant. However, in the two key scenes he shared with Joel Colodner as  his father Henry IV, both actors reached new levels of sincerity and excellence. Entirely because of the honest and moving performances, Part 1‘s Act 3 scene 2 and Part 2‘s Act 4 scene 5 quickly became some of my favourite scenes in the piece.

In contrast, Allyn Burrows was exactly the right amount of exuberant as Hotspur. Technically too old for the role, Burrows brought great warmth and energy to the hot-tempered rebel and quickly made me take Hotspur’s side in the conflict. His tender relationship with his wife Lady Percy (played by the wonderful and feisty Sarah Newhouse) greatly added to the sympathy of the character. Burrows was also a standout as the excellently buttoned-down Warwick, though I was very far from fond of his take on the troublesome Pistol.

In fact it was Pistol’s sphere that caused most of the problems I had with productions. Especially in Part 2, most of the scenes involving the Eastcheap gang read as broad and frivolous. Bobbie Steinbach saves them a bit with a wonderful couple of scenes as Mistress Quickly, but Erin Elizabeth Adams’ obnoxious Doll Tearsheet pulls them right back down again. Michael Forden Walker is an excellently cool Poines but ultimately it’s Robert Walsh’s Falstaff who is supposed to win the day and he fails to do so. Though he delivers in some scenes, Walsh is just not quite consuming enough as one of Shakespeare’s most beloved characters (and his fat suit is distractingly atrocious).

Walsh did deliver as the company’s violence designer, creating an engrossing war that makes innovative use of shields for gun-like sound effects.  The fight between Hal and Hotspur (appearing both at the end of Part 1 and at the beginning of Part 2) was very well executed and the lights and sound hit a homerun in this section (I particularly liked the light coming up through the floorboards).

But my favourite thing about the productions was somewhat unexpected. I quickly fell mysteriously and wholly in love with Risher Reddick, who played about 4 different roles. His bumblingly cute turn as Feeble was delightful, and his heroic Lancaster was excellent, but it was as the romantic soldier Mortimer that he really stood out. Alongside Obehi Janice’s beautiful Lady Mortimer, Reddick was phenomenally charming, quickly becoming my favourite character actor on the stage. I looked forward to each and every new character he brought to life.

The Coveted Crown was a unique experience of theatrical achievement. It was innovative, clever and wholly engrossing, a gem in the ASP’s heavy crown.