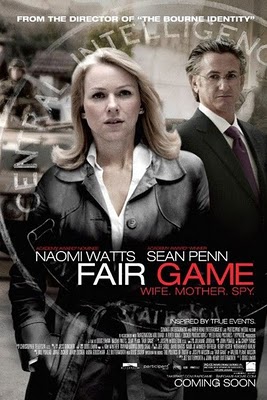 The true story of Valerie Plame, the CIA agent who was exposed by the Bush White House as payback for her diplomat husband speaking out of turn, is enthralling. It’s got built-in suspense, fascinating characters, some of the highest stakes ever to make it onto the page of a screenplay. The film stars the excellent Naomi Watts and a top-of-his-game Sean Penn and was directed by Doug Liman, the captain of such powerful vehicles as Mr. and Mrs. Smith and The Bourne Identity. It should have been captivating.

But it was just okay.

It was fine. It was interesting at times but not quite as interesting as it should have been. It was engaging at times but never quite as engaging as it should have been. My feelings about Fair Game can basically be summed up in the fact that my favourite parts were 2 sequences where Valerie and Joe had dinner with their friends (played by such wonderful people as Norbert Leo Butz, Ty Burrell, Brooke Smith and Jessica Hecht- seriously, at about 2 lines each this was a strangely all-star cast). It was in these brief scenes that my interest was really peaked- dinner party chatter. Casual political debate that never remains casual, the dichotomy of the decently informed citizen and the actual insider- that’s where the issues lived, in the difference between what’s true and what smart people are allowed to know. That was the best part of the movie- the periphery friends who don’t know what they’re talking about.