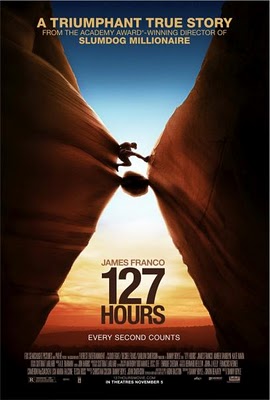 Blood and Guts and Sheer Will

127 Hours is a lot. And very little. And all sorts of things. It’s a bit of a slog, it’s beautifully shot, it’s the James Franco show, it’s bloody, it’s tough, but mostly, it’s pretty amazing.

There are two superstars who really make 127 Hours what it is (aside, obviously, from Aron Ralston, the real life protagonist whose memoir the film recounts): director Danny Boyle and star James Franco.

The film has very little story to tell before and after Ralston is trapped by a bolder in a canyon, that means for maybe 80% of the film’s 94 minutes, all Boyle had to work with is a rock, a hard place, one guy and a rucksack. So that’s what he uses. Boyle creates the horrifying reality of Ralston’s shrinking world brilliantly using a video camera as his Wilson-of-sorts (to invoke the same comparison as every other reviewer out there) and his dwindling supplies as a representational countdown. As Ralston goes without sleep, runs out of water and generally begins to slip away from reality, Boyle creates a colourful dreamworld of memories and delusions for both Ralston and the audience to escape to in avoidance of the treacherous reality. Visually stunning and directed with great pathos, 127 Hours is a directorial tour de force from Danny Boyle.

And speaking of tour de force, if there was ever a part for a guy like James Franco to really bite into its this one. A talented if eccentric actor, Franco’s perhaps the least predictable project picker in Hollywood. But thank god he picked this one, because I can’t imagine anyone else playing it quite so well. Armed with an elusive sort of charm, Franco perfectly captures the essence of a man who could easily slip into a fun afternoon of adventure with a couple of girls he meets in the middle of nowhere then turn around and seek out absolute solitude.

From the moment that rock slides into place trapping him, to the moment he torturously frees himself by cutting off his arm, Franco commands the camera effortlessly, alone. His panic, sadness, hysteria and desperate humour lead the audience through a tumultuous psychological journey right alongside him. The moment when he demands of himself that he not lose it is truly unbelievable. The small details of survival- the careful rationing of a single canteen of water, the painful moistening of hardened contact lenses- are the worst, they make the dull ache of time passing leading up to the final (and now infamous) amputation so unbearable that you’re rooting for freedom at any cost.

Ultimately, in spite of the blood and gore and horribly unpleasant slow walk towards death-ness, 127 Hours is the most triumphant movie I’ve seen in quite some time. It’s about survival and the amazing things that we’re capable of, even when (or especially when) literally trapped between a rock and a hard place. It’s the story of a remarkable man told by two remarkable artists. I walked out of that theatre and saw a slightly different world. In his 127 hours of captivity, Ralston lived for the 15 minutes of sunlight he got each morning. The privilege of walking out of that theatre, pinned down by nothing, with all of my limbs and the ability to feel the sunlight on my face felt like such a remarkable gift. It’s a powerful film that changes the way you see the world, even just temporarily. 127 Hours is nothing if not inspiring. It’s a story about the power of will, a tribute to a man who decided he was going to be okay; he decided to live, and so he did. What a concept.