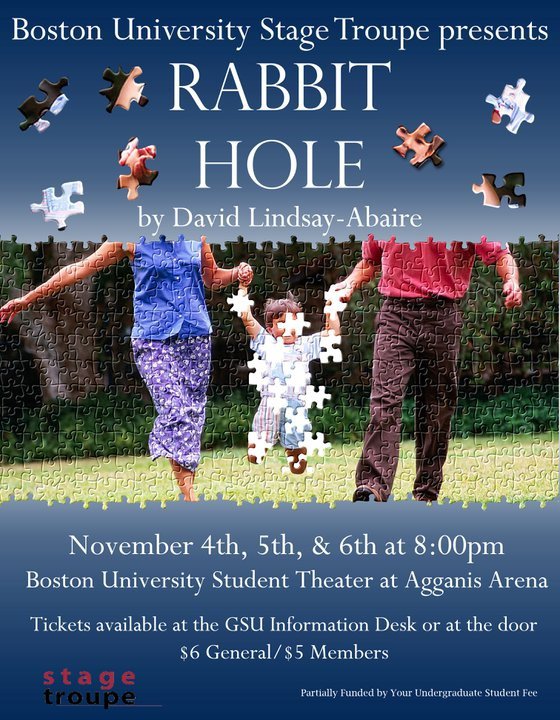 Jumping Wholeheartedly down the “Rabbit Hole”

The director’s note for BU Stage Troupe’s recent production of Rabbit Hole by David Linsay-Abaire was simple and true. Directors Chris Hamilton and Agatha Babbitt wanted the audience to know that what they were about to watch was not a tragedy. Rather it was a glimpse into the lives of a family who’d suffered a tragedy. It was too complicated for a genre label, too funny, too true, too ever-changing, too human. It was this distinction that made this production truly great. Their goal was to tell a story, not make us cry, thus they managed to do both.

In the enormously challenging and mature play, the highlight was, without a doubt, Madeleine DiBiasi in the central role of grieving mother Becca. Under Hamilton and Babbitt’s insightful direction, DiBiasi left her 21-year-old self behind and disappeared into her heartrending role. Her more dramatic moments were tackled well but it was the everyday ins and outs of the performance that really inspired. It wasn’t the way she cried, it was the way she looked as though Becca was fighting with every fiber of her being to not cry. DiBiasi’s performance really lived in the small smiles Becca mustered when she remembered her son, how she rolled her eyes at her kookily predictable sister’s antics, the relatable way she didn’t know where to put her hands when she was uncomfortable. She had great timing, charm and empathy, but most of all, DiBiasi brought a necessary subtlety to the role, unafraid to play the human mundanity between Becca’s big moments.

The other highlight in the cast was Dan Stevens as Jason, the guilt-ridden teenager who’s careless driving resulted in the death of Becca’s son Danny. For most of the audience, it was moments after Stevens appeared that they began to cry. His earnest and awkward recitation of a letter he wrote to the grieving parents was unbelievable. It was a moment that sucked the audience in so completely that I didn’t snap out of it until the girl I was sitting next to leaned over and proclaimed “he was amazing”.

The rest of the cast, Vishaal Reddy (Howie), Lauren Kolodkin (Izzy) and Allie Romano (Nat), each had good moments and bad. It was overall much more difficult to see them as anything other than actors trying really hard. They played the moments rather than the characters and the result was a lack of consistency that just didn’t stand up to the nuanced performances of their co-stars.

Ultimately, Stage Troupe’s Rabbit Hole was a revelation of a play. My first exposure to the remarkable text, I found it inspiring, affecting and remarkably truthful. With Hamilton and Babbitt’s direction and the tremendous efforts of DiBiasi, Rabbit Hole is not a production I am likely to forget any time soon.