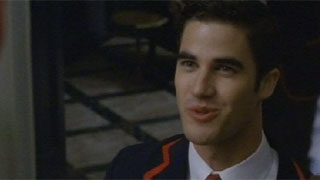 I don’t usually cry while watching TV. Well, maybe sometimes. Okay, every now and again, but not super super easily. I’m secretly a cryer, I’ll admit that; I’m a chocolate turtle; one of those “nougat-y” people is what Glee would call me. Or, as my friend Rini puts it, I’m a marshmallow. But Glee usually just makes me mad. It’s one of the few shows that elicits a big reaction from me; underneath my metaphorically mixed porcupine spikes, deep down in my marshmallow centre, Glee makes me feel things, usually anger. But tonight, tonight was all sorts of genuine human emotion inspiring, and not one of those genuine human emotions was anger.

The “big twist” of the bullying story was easy to spot from before the opening credits, the Puck/Artie story was a little shaky and under no circumstances should getting to kiss Will Schuester seem like a prize (ugh). A lot of the characters lost some credibility in that final pandering scene where they all started to lie so they didn’t seem like bad people anymore, the boys’ musical number could have been much more cleverly chosen and making poor Beiste sit through that scene was just mortifying. But none of those things were terrible. Some were annoying, others were just underwhelming, but mostly they were just the mandatory valleys that allowed for the tremendous peaks of this episode. Abandoning theme, as they do in all their best episodes, Glee really got me this week, all the way through the tough chocolate “I hate Glee” to the nougaty schmoop in the middle, just like a turtle (thanks Sam, the metaphor’s been useful).

The first emotional breakthrough of the night was one of those subtle happiness things that, had I been watching with friends, I probably wouldn’t have let on to. It was during the “Teenage Dream” number at the all-boys prep school. I was doomed from the get-go on this one because not only do I have a guilty pleasure love of that song but I adore a good prep-school-boy story. School Ties, Dead Poets Society, The History Boys (not really prep school, I know), even Gossip Girl sometimes, they’re my favourite (go ahead Freud, take your best shot). The (unavoidable pun, I apologize) gleefulness of that number was goosebumpy. And the look on Kurt’s face (once again, reiterating, Chris Colfer is THE actor on this show), it was everything. I grinned from ear to ear for every second of that performance, falling in love with the warblers myself and jealous of Kurt for the days of sweet happy crushes where just watching the person makes everything better. That scene was the sort of thrilling secret happiness that you feel in your toes and fluttering in your stomach- that’s the stuff.

Oh, and the triumphant pride that came later in the episode when Kurt, abused by the writers last season as he whined and pined his way through the victim role, finally stood up for himself- that felt good! The courage and strength and sense of self and confidence of principles that that took- I literally cheered for him. Given courage by the wonderful new character Blaine, Kurt stopped letting himself be made into (and making himself into) a victim. For the first time, the kid seemed comfortable in his own skin. And the emotional hits just keep on coming.

The joyous excitement of the awesome “Livin’ on a Prayer”/”Start Me Up” mashup that gave the girls a chance to finally truly rock out: grin-worthy, dance-inspiring, download-prompting AMAZING. done. moving on.

And the Beiste. Oh, the Beiste. I adore her, I have since the first time she showed up. Other than the fact that she really shouldn’t have let Mr. Schue and the boys so uncomfortably pander to her at the end there, her arc in this episode was truly heartbreaking/wonderful/some of the most beautifully honest writing this show’s ever had (and Dot-Marie Jones, what a performance!) This is where I cried. Obviously. If you’ve ever read this blog, ever, or know me even a little, you could have guessed that (oh and the proud of Kurt thing, sometimes pride gets me too). She was so vulnerable but sort of uncomfortable with that fact, strong and smart and unwilling to play the victim card but still willing to share the tough stuff. My god, would that we were all as amazing as Shannon Beiste.

Bravo Glee writers, that’s 3 good episodes in row. And this one wasn’t just good, it was “I’m gonna remember feeling like that for a while” kind of good (if we ignore the bad, which I’m absolutely dedicated to doing in this moment). The ups and the downs of joy, empathy, pride and all the other complicated and ultimately awesome stuff- that’s metaphorically busting up the robotic song machine for you. Now to actually bust up that robotic song machine…