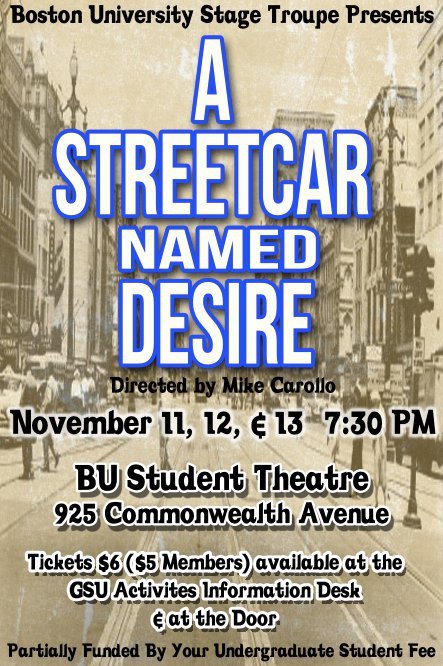 A Streetcar Named Whatever

Clunky direction and unattainable goals quickly became the central problems of BU Stage Troupe’s recent production of A Streetcar Named Desire. It’s an epic piece, not in the classical sense of scope but in the sense of how famous, how challenging, how iconic the work is. It’s a little beyond college students. This group did find some moments of truth, but overall, they got a little lost in the intense text.

Elise Roth’s Stella perfectly embodied how I felt about this production. She was good at times, forced at others, but mostly she was unoffensive. She didn’t inspire frustration, but her biggest fault was that she didn’t inspire much of anything at all.

Travis Cherry’s Mitch was a similar phenomenon. He was cute I guess, but he wasn’t a lot more than that, a bit of a caricature really.

Like Mitch, Stanley (Mat Leonard) suffered from a mumbling problem. But he also had a bumbling problem. His walk was stiff and strange and he tore around the small set as if he didn’t fit (which could have been metaphorically valuable if it had looked more purposeful). I’m not saying he was bad, I liked him better than most of his cast mates, but ultimately there was one big problem with this Stanley, I could see through him. Leonard, despite his hulk-ish appearance, is clearly a bit of a marshmallow. He broke into a goofy smile when curtain call was slightly flubbed and his strongest scene was Stanley’s tenderest moment. Leonard may be physically capable of the sort of violence that characterizes Stanley but he reads as someone who wouldn’t hurt a fly. Unfortunately, that doesn’t really work here.

I really enjoyed Sarah Ann Adams as Eunice, a tragically small part. But it was ultimately Blanche’s story. Rebecca Savoy put forth tremendous effort in the role but ultimately fell short. Her Blanche became more accent than character and though she had moments of poignancy, she generally didn’t do much with the groundbreaking character.

Mike Carollo’s formulaic direction and constant interruptions by drawn-out set changes made for infuriating pacing. The set was nice, the brickwork on the front was particularly meticulous, but little things like the ever-falling Chinese lantern, the strange lobster mold hanging by the door and the terrible fake pregnancy belly were distracting. The fragility of the set in general combined with Leonard’s dangerous strength put the audience more on edge than the troubling story itself.

Streetcar is hard. I think that was most of the problem. It takes astronomical skill and work to mount it effectively. Unfortunately, the cast and crew behind Stage Troupe’s production wasn’t quite up to the task, resulting in a generally unoffensive but uninspiring experience.