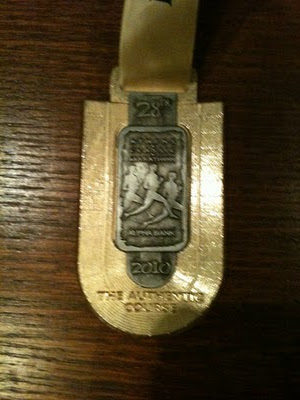 The Battle of Marathon took place in 490 BC. Legend says that a soldier named Pheidippiedes ran from the site of the battle to Athens to relay news of the victory of the Greeks over the invading Persians. This legendary run has since inspired millions all over the world to lace up their running shoes and train hard to conquer the classic and challenging distance. The modern race was revived in 1896 in Greece during the first modern Olympic Games, when athletes raced from the Marathon Town to the Panathenaikon Stadium. On October 31, 2010, the 2,500th anniversary of the first marathon run was celebrated with the “Athens Classic Marathon”, and my husband and I were fortunate to be among the more than 15, 000 runners and power-walkers who participated.

The race was dedicated to Gregoris Labrakis, a track-and-field champion who organized the first Peace Marathon from Marathon to Athens in 1963. As the 15,000 athletes gathered at the start of the race, this seemed most appropriate, feelings of camaraderie and goodwill permeating the international crowd. I saw several people in costumes, including a few centurions carrying large shields and wearing “armor” and helmets. There was no starting gun, but rather an enthusiastic man shouting “Go, Go, Go!” to notify each wave of runners it was time to start. As we began our long run or walk to the finish line, we were greeted by spectators lining the route, enthusiastically cheering and supporting us in a multilingual wave of positive energy. From the children offering us olive branches to the shouts of “Bravo” from the adults, the spectators were spectacular!

The course started innocuously enough, on a flat route from Marathon Town to the Marathon Tomb. However, by the 7 kilometer mark, we settled in to a steady uphill climb in the hot Greek sunshine. The water stations and medical support were plentiful, which was a good thing. Several participants were seen riding by us in the bus provided by the organizers to assist the people who could not finish. I saw one of the centurions struggle under the added challenge created by his costume. I don’t know if he finished the race. I was hot under a ventilated cap – a helmet would have been beyond me!

The course continued uphill, but afforded us glimpses of the Aegean Sea and gorgeous views of the countryside giving way to storefronts and the urban environment of Athens. At one point, I heard the sounds of a lively trumpet tune, and looked around to see a youngster of about 10 playing for the runners. At the 32 kilometer mark, we started going downhill, a welcome relief, and around 41 kilometers there was shade on the route for the first time. We passed gorgeous government buildings, and when I went by, the soldiers in traditional dress were engaged in the Changing of the Guard – a special treat.

And then, there was the beautiful marble Panathenaikon Stadium before me. Crossing the finish line in this historic site under the Olympic rings was emotional and thrilling, and the beautiful medal a grand reward for the completion of a challenging race.