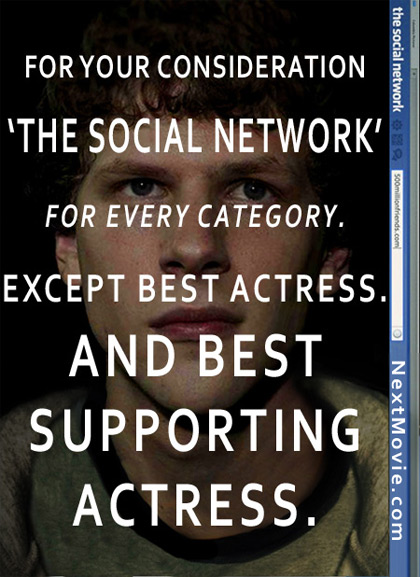 The Social Network and Sexism

Sometimes I think I see sexism in movies where there isn’t any. I think that I am oversensitive when I whine about the portrayal of women in Hancock, or the dearth of legitimate female friendships, or the double standard represented by the MPAA’s recent decision to categorize “male nudity” as separate from “nudity,” while maintaining that female nudity is just “nudity.”

But then other people start whining about something fairly innocuous in a brilliant film, and I realize I’m actually quite sane. The recent internet controversy over perceived gender discrimination in a film revolves around The Social Network, I guess because whenever a movie has that high of an approval rating on Rotten Tomatoes people need to find something to whine about.

The claims basically stem from the fact that the few women in the film are either a) crazy, b) topless or c) Rooney Mara (who one article refers to as “the bitch who got away”). This is pretty indisputable, although I’d throw in Rashida Jones as a relatively positive female force in the film. In fact, Jones’ character is the only one able to get through to Jessie Eisenberg’s Zuckerberg, and she provides the film with the closest it has to a summation of purpose. But okay. Let’s discount her, since it’s a pretty gender neutral role and besides does one female lawyer really undo the rest of it?

Well, my point is not that The Social Network has a lot of positive female characters. It’s that why the hell should it? As someone who has searched throughout my pop culture career for female characters who are as daring and interesting as their male counterparts and often found the selections wanting, I can still see that not every movie needs to be about female empowerment. That would get kinda dull.

More importantly, the story of facebook as streamlined by Sorkin and Fincher in The Social Network, is a story in which every single character is defined solely by their relation to Eisenberg’s Zuckerberg. Andrew Garfield is a wimpy loyal noob* incapable of saving himself from irrelevancy. Justin Timberlake is an almost lustfully appealing go getter turned pathetic self-defeating drug addict. The women, therefore, that surround them represent Mark Zuckerberg’s (or at least Sorkin’s fictional version of Zuckerberg’s) view of women, and more specifically the type of women who would come into his life by virtue of that being his view of women.

More importantly, the mere categorization of Mara’s character as “the bitch that got away,” displays the view of the author that a woman who objects to being repeatedly told she is stupid, worthless, and inherently in the debt of her male companion is a bitch. That’s absurd. No one leaves that scene thinking that Mara was in the wrong to dump the shit out of Zuckerberg.

Anyway, while I understand the urge to criticize popular films, especially for perceived biases, and I think that everyone is entitled to their opinion whether or not I agree with it, I think that sometimes our gender backlash takes us so far away from the real issue that it helps to disguise legitimate claims to sexual discrepancies in cinema and make it all seem to come under the category of typical womanly whining.

And that really makes me sad. :(

*pathetic attempt at incorporating internet slang acknowledge and the author is adequately ashamed of it.