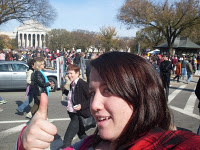 The Rally To Restore Sanity

It’s saying something that I considered briefly whether this even qualified as a MY TV story. After all, the Rally to Restore Sanity was an off-shoot of The Daily Show and The Colbert Report, and Stewart himself occasionally down played the event as basically a 3 hour long comedy show. But in the end, what actually occurred down in D.C. yesterday was not a comedy show, although it was often very funny, but rather a sincere attempt by lots of different sorts of people (although you won’t hear FOX News admitting that) to reclaim a political narrative.

D.C. was packed before we could even get near the Washington Mall. In fact, getting on the Metro at the farthest reaches of DC, the line stretched through the entire parking lot and was at least 300 people long. The estimates of the crowd at around 220,000 seem conservative. This is a place used to humongous rallies, and it seemed overwhelmed.

In fact, it was so overwhelmed that if you weren’t one of the people who got there at 8am to try and get a prime spot, it was often very difficult to see and hear. People resorted to climbing trees (no lie) and sitting on port-a-potties. We got friendly with individuals who we had only just met, because when you spend three hours with your butt in somebody else’s face, it’s only polite to offer them a howdy.
Despite the cramped quarters and surprisingly poor acoustics, this was probably the politest, happiest, sincerest group of people I ever had the great pleasure to spend three hours uncomfortably close to. When the police politely requested they get off the port-a-potties, the assembled grungy looking twenty somethings did so without so much as a mal-intentioned grumble. When one of the rally goers struggled to climb up his tree, the crowd cheered him on and sounded legitimately sad for him when he failed. It was kind of like going to a marathon after years of football events- when all you’ve ever seen is people hating on the other team so much they want them broken and battered in their own end zone, it’s a refreshing change to watch 20,000 people just trying to improve themselves.

The message of the event was clear: the people there, and Stewart and Colbert as our proxies, are sick of being told how we feel about each other, our country, and our lives. Signs ranged from the apathetic to the mildly vitriolic, but the overall feel was that of a people trying to show the world that we are all way more similar than we give ourselves credit for and way more capable of behaving in a civilized manner. The content presented by Stewart and Colbert was surprisingly even-handed, mocking extremism on the left and the right. The crowd was substantially more left leaning, some of whom didn’t quite see the irony in carrying signs filled with hatred towards Republicans at a rally all about the fact that we don’t need to hate each other. But by and large, the crowd, like the rally itself, was funny, self-aware, and looking to have a positive, political moment.

Stewart’s closing speech, 12 minutes of heartfelt, mild-chuckle inducing philosophy, summed up the strange precipice we find ourselves on:

“But we live now in hard times, not end times. And we can have animus, and not be enemies. But unfortunately one of our main tools in delineating the two broke. The country’s 24 hour political pundit, perpetual-panic conflictinator did not cause our problems, but its existence makes solving them that much harder. The press can hold its magnifying glass up to our problems, bringing them into focus, illuminating issues heretofore unseen. Or they use that magnifying glass to light ants on fire, and the perhaps host a week of shows on the “dangerous, unexpected flaming ants epidemic!’ If we amplify everything, we hear nothing.”

I don’t know if Saturday will change anything come this Tuesday, or next Tuesday or a thousands Tuesdays after that. But I do know that as a young American, sometimes so overwhelmed by what seems like intractible differences between “them” and “me,” Saturday was a pleasant reminder that underneath everything, we all think New Jersey sucks.