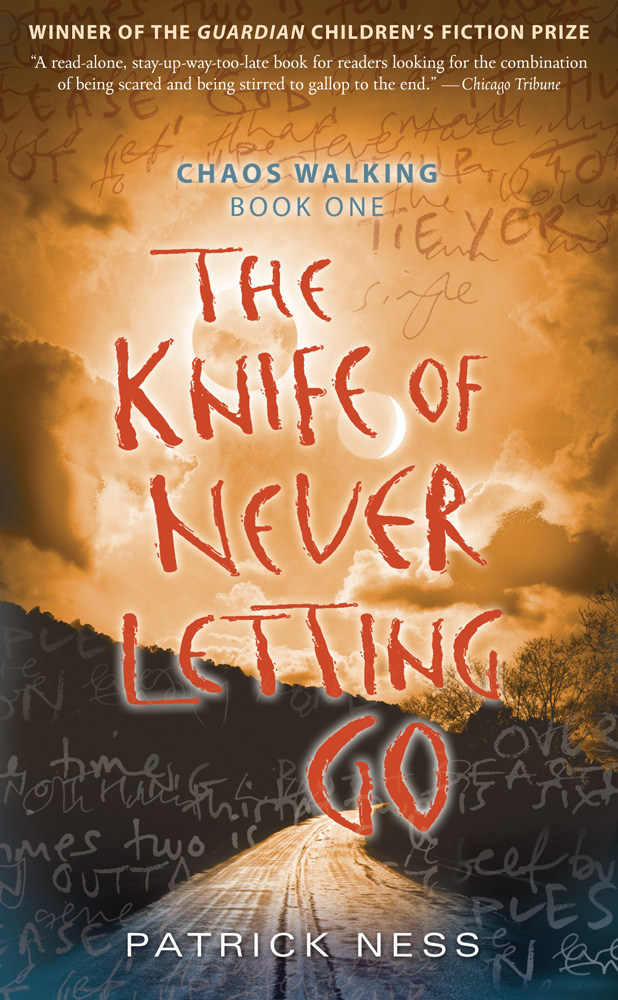 The Knife of Never Letting Go

Young Adult novels are like catnip for me. I eat them up like they’re about to disappear, and during the process I sink inside of them and stretch out like I’m meant to live there. Because of this, I read A LOT of young adult fiction, and even the worst of it tends to hold my attention.

Still, it’s rare that a book makes me rethink what books can do. The Hunger Games series was like that. It picked me up from my daily stupor and shook me and made me rethink everything. Coming so soon after finishing that series, I’ve recently been reading books more with an outlook of: well, I dont have TV yet, so I might as well read something fun.
Then I picked up The Knife of Never Letting Go. And it picked me up and shook me out and left my dazed, confused, and desperate for the next book.
I’m not going to go into a lot of detail, but here’s a ridiculously brief summary: The Knife of Never Letting Go tells the story of Todd, a young man living in Prentisstown on a foreign world that is western-influenced. Prentisstown is not like other towns; for one thing everyone can hear everyone else’s thoughts (and all the animals can talk). Which sounds adorable, until we get to the second part: there are no women in Prentisstown, and the people there hold horrible, unfathomable secrets that they work hard to cover up. The sounds of men filter together into an overwhelming and mostly indecipherable omnipresent “noise,” which in Prentisstown is a horrible mix of sound and pictures and hatred. When Todd discovers something abnormal in the swamp as he approaches his all-important 13th birthday, he has to run from Prentisstown, along the way discovering why exactly his world is so damn messed up.
That doesn’t even begin to cover what The Knife of Never Letting Go is about, but half the beauty of the book is in trying to untangle the books ample metaphors and mysteries. On top of that, the unique stylistic voice of the book is constantly engaging and unique.
It starts to lose some steam near the end, and the ending isn’t as satisfying as you will want it to be, but The Knife of Never Letting Go is something so much more than all that: freaking mind boggling. From the beginning to the end of the book, I was glued to the pages, and thinking the entire time (which, to be honest, is a lot to ask of me of late).
It’s more than worth it, it’s practically neccessary reading for fans of quality young adult ficiton.