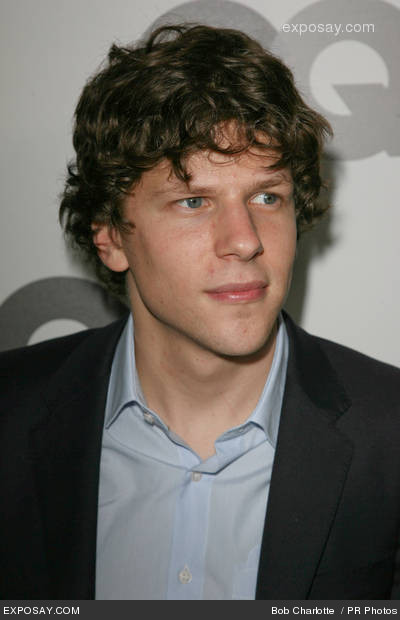 I first saw Jesse Eisenberg* in the 2005 film The Squid and the Whale. In it, he played the mostly unlikeable, snobbish son of a couple going through one of the most nasty divorces ever put to film. The movie showed Eisenberg’s transition from gawky, assholeish teen to sympathetic young man against the back drop of his parents’ marital decline and childishness, and its his rehabilitation that provides the films backbone. It’s a fascinating, frustrating film, that is carried primarily by its then-21-years-old stars fantastic, nuanced portrait.

Perhaps its because of this that I never quite got the Michael Cera comparisons. If anything, way before Juno and Superbad made Michael Cera anything other than George Michael from Arrested Development, I already had Eisenberg on my radar as a young man to watch, who could make the awkward and unlikeable strangely sympathetic and redeemable, and who worked best within complex, beautiful scripts that dealt with universal themes like jealousy, heart-break and what it means to care about other human beings.

This isn’t a review of The Social Network. Kelly, as this site’s Editor In Chief, has claimed the honor of writing about that breath-taking film. This is about why Eisenberg comes out of it seeming so damn triumphant, and why it’s worth taking a look at his previous filmography to establish that this was not a fluke. Eisenberg is a star to watch, a man who can go from charming to awkward to brilliant without batting an eye, but who never sacrifices the reality of his characters for cheap jokes.

On top of the aforementioned The Squid and the Whale, Eisenberg has started his career by playing a wide variety of characters in a plethora of highly-praised, semi-independent films. His two most popular films, Adventureland and Zombieland (hmm…), are probably the most responsible for the Cera–comparisions, but they showcase a lot of what makes Eisenberg unique. He radiates an intelligence that is charming, but he’s also so legitimately awkward and gawky that he makes his characters’ isolation seem believable (Cera, who by the way I REALLY like, in contrast, is always on the normal side of socially awkward, a geeky cutie who girls want to take home and cuddle). He also plays darker, both in Adventureland‘s forays into heart break and doucheyness, and in Zombieland‘s lust for zombie death.

But it’s his less famous roles that really distinguish him. Whether it’s playing an Orthodox Jewish drug smuggler in Holy Rollers or a grown up dealing with his high school bully in The Education of Charlie Banks, he’s built an impressive body of work for a 26 year old (let’s ignore The Village for the time being). On top of that…

I kind of found his extremely selfish, social awkward, douche bag portrayal of Mark Zuckerberg kind of adorable. I hate boiling down what is a very legitimate argument about a young man’s artistic prowess into a squeally, girly, “HE’S SO CUTE,” but, well, this is a series of articles called “My Cinema Crush.”

I had to seriously question my moral compass when I watched him screw over friend after friend and yet just really wanted to give him a hug. Partially that’s cause Eisenberg portrays him with this ferocious, strangely moral intensity that without ever spelling out Zuckerberg’s true motivations, we feel that he is operating the best that he knows how within a world that always seems tantalizingly outside his grasp. But partially that’s cause Eisenberg makes truly awkward douches redeemable and, yes, adorable.

So there it is, the first in my series of cinematic crushes articles. Jesse Eisenberg, geeky douchebag extroardinaire.

*or at least remember seeing him, since I know that he was in stuff before that

** If you really want to see why this kid is so damn engaging, check out this moviephone video with him, Justin Timberlake, and Andrew Garfield. It takes a lot to out funny-and-laid-back the erst-while boy bander, but Eisenberg damn near pulls it off.