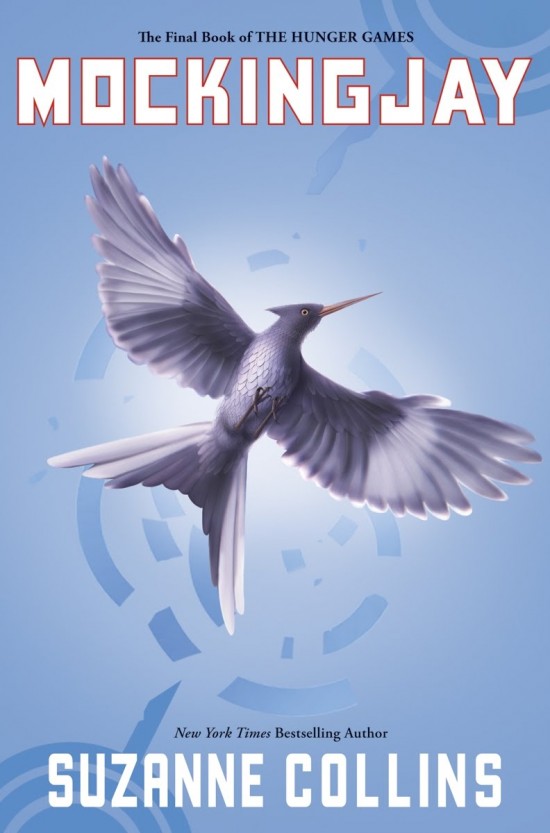 It’s taken me just under a month to post on Mockingjay, the final installment of Suzanne Collins unparalleled trilogy, after having finished it. It wasn’t for lack of passion. But although I may have consumed the novel like a cheeseburger after a Yom Kippur, I wanted to let it slowly ruminate in my mind for the past month, letting the themes and images that characterized Katniss Everdeen’s final chapter run around in my head before I started expounding on it.

First, a quick summary. Katniss Everdeen, in book 1 of the Hunger Games, was caught up by her dystopian government in their ploy to keep the poor districts they controlled in line. She became a “tribute” in the Hunger Games, which required a girl and a boy from each district to compete to the death for the amusement of those in the rich Capital. She and Peeta, a young man whose fate has been entwined with hers since her father first died in a mining accident, survive together against all odds.

The second book saw Katniss Everdeen once again unable to control her fate. The spark of her survival has set off a blaze of revolution, and the Capital once again attempts to control Katniss and control the people. It doesn’t work.

The first two novels in the Hunger Games series were two of the most captivating, entrenching, and fascinating books I’ve ever read. I took them in at lightning fast speed, and devoured every moment of the story. Katniss was a character for the ages, and Peeta was one of the most endearing nice guys ever created. On top of that, the plots were always twisty and turny, fascinating and plausible.

Despite how beloved the first two books were for me, I was unprepared for Mockingjay, a book that I actually think improves upon the previous two. Gone is the straight forward action/romance of the first two (although there’s plenty of that, more on this later), replaced by a morally ambiguous, surprisingly dark look at human nature and the cost of war.

In Mockingjay, Katniss is once again seen as an object to be controlled. She and Peeta throughout this series have attempted to maintain their sense of identity in the face of unknowable power. There’s a particularly strong moment in book 1 where Peeta expresses his desire to show the capital that they can’t make him be someone he’s not. In this last book, that idea of self is pushed to the max. Both Peeta and Katniss are used as objects, and it is in their quest to be more than the sum of their experiences or the result of actions upon them that the book finds its particular thematic resonance.

On top of that, the book reaches a sense of morality and futility that few children’s books ever have encapsulated. When Katniss is rescued at the end of Book 2, and brought to the thought-dead colony of District 13, it was tempting to think of it as salvation. But Collins is not content with the story of one little girl taking on the Goliath of her own civilization. This isn’t a straight-out hero story. And this takes it to an unusual place, where instead of the rise and fall, tension and climax of traditional fantasy stories, we have Katniss grappling with the inevitable tendency of power to corrupt. Although District 13 may be preferable to life under The Capital, it’s a dystopian nightmare of its own. And while The Capital may make for slovenly shallow people who were content to watch children kill each other for their amusement, it also creates people capable of unfathomable beauty and kindness, and all of that is worth preserving.

In the end, Katniss and the readers are left with an indelible sense that the world is far more complex and infuriating than we can understand. Katniss suffers loss so heavy she seems incapable of moving beneath it. The readers, similarly, lose all sense of human value as we watch everything we’ve taken for granted get stripped away. Collins is never afraid of portraying the inevitability of death nor the fallibility of all of our beloved characters.

But the novel isn’t all dark. The love story, which about halfway through Mockingjay starts to seem a bit dragged out, keeps the tone from ever getting too bleak (until the very end) and the legitimate sense of love and kindness that pervades the novel makes the depressed-but-still-hopeful ending feel deserved. As the reader, you’ve gone through hell along with Katniss. But Collins makes you believe in the smallness of victory of the human spirit. Power may corrupt, systems may fall, and people may die, but life goes on and has beauty.

The biggest problem for me in so many examples of Young Adult fiction is the distinct lack of consequences. In order to make an ending swallowable for a young audience, far too many writers feel the need to wrap things up neatly. I don’t always mean Twilight-style, everyone is happy if wicked creepy for falling in love with a baby style endings, but it can be as simple as killing off one love interest in the hopes of making a heroin’s choice for her. Or leaving her with a tangible sense of home to go back to. Katniss is not allowed these cheats; the true costs of what society and her life have come to are in full force. And this makes the story far more adult than would be easy.

In the end, the story is best summed up with a metaphor Collins herself creates for us at the end of the journey. Katniss, broken and beaten, wanted for murder and wanting for nothing, alone and hopeless, stumbles over the ruins of District 12, which was once her home. In the vast emptiness and rubble, she hears familiar footfalls. It’s not Peeta, the boy who saved her life in the arena, or Gale, the childhood friend who loves her, but her sister’s ugly, angry, survivor of a cat. Their whole lives together have been a battle, a battle for attention, for food, for affection. They’ve hated each other, hurt each other, resented each other. Yet as Katniss, the girl who was on fire, slowly nurses her burns (both physical and emotional) and gets back to health at the end of the novel, it is the love, support and protection of this embattled feline that surrounds her, and gives both her and us hope that love can survive and is worth the battle.