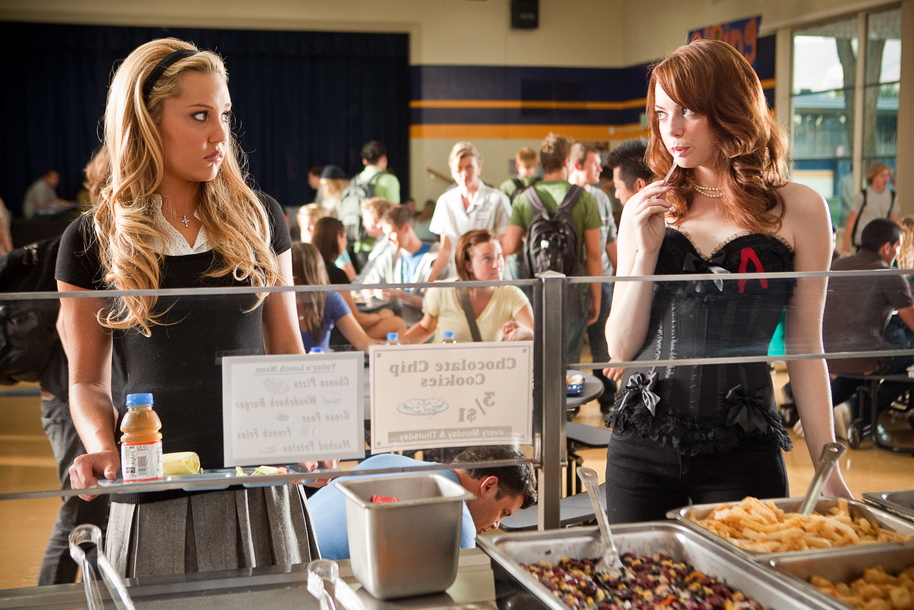 Teen comedies live or die based on their casts. A brilliant script is a plus, kicking direction can be a boon, and an original concept is always appreciated, but they live or die based on their casts. Think of the very best teen movies (Ten Things I Hate About You, Mean Girls, Can’t Hardly Wait, Saved!). Almost all of those have great scripts, good direction, whatever, but what do you remember when you walk out? Heath Ledger crooning “You’re Just Too Good To Be True,” Rachel McAdams verbally bitch smacking her minions, Seth Green’s wangsta chic, or Mandy Moore’s hilariously sincere religious zealotry. Good scripts are wasted on crappy casts, but a great cast can elevate a relatively pedestrian script.

Emma Stone is a one-woman great cast. There’s a persistent rumor that women can’t be funny that no amount of Tina Feys or Anna Faris or Amy Poehler or Lauren Grahams can overcome. I don’t blame people. I’ve seen a lot of movies, and 90% of the time women get few laughs (often at their expense — oh whoops! I just tripped! hahahahaha, women, aren’t they funny?) while they’re male counterparts go off on random, extended riffs designed to leave you howling. Emma Stone, however, unlike most of her age group, is legitimately funny. It’s not just her lines. She almost never relies on pratfalls. She’s not gross out or ridiculous or over the top. She’s just funny.

I remember watching Superbad, a movie that lots of people decried as being anti-feminist and boyish, and thinking that the best thing that Judd Apatow, Seth Rogen and crew had done was to cast this strangely down to Earth and witty creature as Jonah Hill’s love interest. Sure it was absurd that someone so gorgeous would be interested in Hill’s Seth, but damn if Stone didn’t seem such a natural in the part that you almost believed her. Over the years, my regard for the actress has only grown, whether she was fighting zombies or battling with crushing stupidity in The House Bunny. She’s a natural comedian on screen.

And Easy A is the perfect vehicle for her. She gets to be funny in the same way as male comedians have been allowed to be for years- going off on monologues, getting herself into awkward situations, and generally trying to be the best she can be. On top of that, her character is an amazingly intelligent, self-assured teenager (teenager being the operative word here- even the most self-assured teenagers are prone to bouts of stupidity) and a fantastic one to boot.

Easy A is loosely based off of the ideas of The Scarlett Letter. Stone plays Olive, an ignored but intelligent high school student. When rumors of her devirginization with a college freshman spread like wildfire throughout her small town high school, she enjoys and exploits the attention. When that quickly grows (she tries to help out a gay and bullied friend by pretending to sex him up at a party, which leads to others wanting a similar popularity boost) into full on ostracizing for the supposedly sexually adventurous senior, Olive decides to take a “screw you guys” approach and embrace her outsider status, going so far as to embroider The Scarlet Letter inspired A onto her increasingly scandalous wardrobe.

The plot is decent, and actually touches on some really interesting issues (sexual double standards, marital infidelity, and being yourself in the face of, well, high school), but it’s the cast and popping script that make this a movie worth seeing. The script continually dances on the border of being overly cute, but thanks to the direction and the cast it seems as sure footed as a gymnast on the high bar (how’s that for overly cute for ya?).

On top of Stone, the rest of the cast shines. As Olive’s absurdly chill parents, Patricia Clarkson and Stanley Tucci will make you wish to trade your own parents in, no matter how fantastic they are (sorry mom and dad, just kidding. Comedic exaggeration, don’t ya know). They have a natural paternal chemistry with each other and with Stone that truly elevates their scenes. Penn Badgley, as Olive’s sort of love interest, is great but never over-shadowing (this is Stone’s pic, after all).

The other highlight is Dan Byrd as Brandon, the friend who first convinces Olive to descend into the work of imaginary prostitution, whose comedic rhythms fall into such natural hilarity with Stone that you’ll be left wanting more. The scene of their supposed coitus at the party is as hilarious and raunchy as anything Judd Apatow ever produced.

Amanda Bynes is actually pretty wasted in her role as a Mandy Moore-esque Christian boogey man designed solely to torture Olive and provide a punching bag for her verbal snark. Frankly, she seems bored. And Lisa Kudrow is similarly useless in her tiny role as Olive’s favorite teacher’s wife, who turns out to be rather less than inspiring. But that’s okay, this picture doesn’t need hilarious bad guys when the good guys are this good.

Easy A is not revolutionary, but movies like this don’t need to be. Much like its star, it has the natural charisma to feel like an instant classic, and leave you wishing you were still 14 so you could watch the movie on repeat and not feel like a freak.