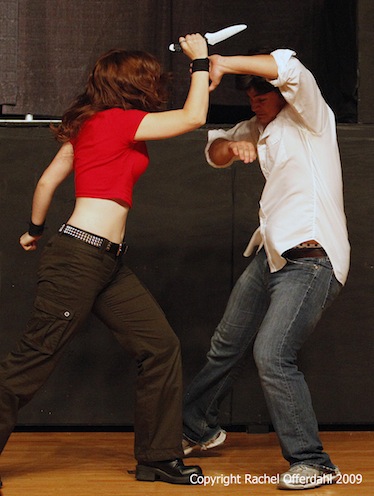 “These Violent Delights have Violent Ends”

or
Choreographed Violence for Violence’s
Sake
There are a few things that people always find memorable when they go to the theater. For my purposes, I’ll use Shakespeare’s Hamlet to illustrate (I have a theme, and I like to stick to it). People will always remember “To be or not to be” (but few will remember the following lines), they’ll always remember “Alas poor Yorick” (even though EVERYONE misquotes that line—it’s not “Alas poor Yorick, I knew him well”, it’s “Alas poor Yorick, I knew him, Horatio”), and they will always remember the duel between Laertes and Hamlet. It’s unfortunate, but one of few things that are really memorable to people who aren’t “theater people” are the bits of violence that permeate plays, and even more so with Shakespeare.
Of course, that’s really not all that bad for people like me. I’ve been involved with choreographing staged violence for the better part of the past three years, so the fights in plays like Hamlet are a chance for me to really create something special that’ll completely wow the audience. But that also presents a bit of a problem. The problem is that for some people, the fights become violence just for the sake of violence.
Now, that’s fine if the point of the play is that it’s a statement on the use of violence in a modern society, but when it isn’t, there has to be a purpose to violence. Fights have to be believable to really have any kind of impact on the audience, and that means that they have to tell a story. One of the fight directors that I worked under told me a story about one of his teachers who would hand out acting and diction notes to the people in his fights, because without acting, the fights were just not worth watching.
The biggest place that this is seen is in the intent of the characters during the fight. For example, I played Sampson in a production of Romeo and Juliet, and the script called for me to fight with Balthazar. When the fight director sat down with the two of us, one of the first things that he asked us was “why are you fighting?” The answer? Sampson just wanted to knock Balthazar’s block off. We weren’t fighting to blow off steam, or to protect someone, we were fighting to hurt each other as much as possible. And then he asked me if I knew how to do dive rolls. That was a really fun fight to do on stage.
In contrast, if you’ve read anything else I’ve written, you’ll know that I also played Demetrius in Titus Andronicus, and that script calls for Demetrius to brawl with his brother, Chiron. Again, we sat down with the fight director, and he asked us the same question (it was the same person). The answer this time? Chiron was trying to rough Demetrius up a little bit, and Demetrius was just trying to remind Chiron that he was the older brother. Completely different dynamic to the fight, even though the “danger” level was technically higher, because both characters were armed. Rather than clearly being a fight to hurt each other, it was much more like two dogs romping around and crashing into each other in terms of the vibe that I got from it as a participant. Also a very fun fight.
I guess the point that I’m trying to across here is that a fight is never just violence. Each fight that happens on stage is like a play unto itself. It has a beginning, a middle, and an end, and each involved character has a distinct personality, style, and intent, and that these are the things that a fight director is able to draw out of the fight. Of course, to make it all work quite right, there has to be communication between the stage director and the fight director, but ultimately when the two agree on a vision for the fight, staged violence can become something really special and memorable for the audience.