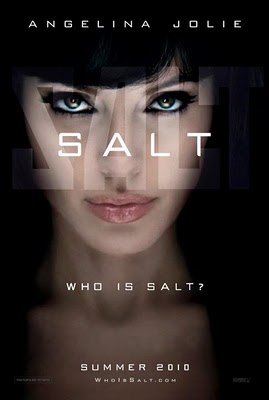 I’ll keep this brief, there’s not actually a lot to say about this film. The coolest thing about Salt is that the lead role was originally written for Tom Cruise and then tweaked to fit Angelina Jolie. The fact that a skinny chick like Jolie is in practice a hundred times more badass than Hollywood’s erstwhile favourite action hero, is pretty darn cool. The film flies by, the stunts are great, the pacing perfect and the performances pretty decent. The story’s okay, the effects impressive and the dialogue acceptable. In fact, Salt would be a truly awesome absurd summer movie if it weren’t for one thing.

I’ve heard people complain that she should be dead within the first 10 minutes. I don’t actually care about that fact at all. If we were looking at realistic survival statistics James Bond would never make it out of the scrapes he gets himself into. No, I’m all for bizarre heroics and feats of inhuman strength and cunning. My problem is predictability. Let’s pretend for a minute that Liev Schreiber didn’t accidentally let slip the big twist on The Daily Show (and desperately try to cover it up- to moderate success). I still think I could have seen it all coming

Of course Angelina’s one of the good guys- she’s the title character! They establish pretty quickly that she loved her civilian husband, we see her withstand torture for her country and she’s clearly the most capable and smartest character in the cast. If anyone can think of an example in which such a character was anything BUT the good guy I’d certainly like to hear about it. In contrast, I don’t recall ever having seen Liev Schreiber play a good guy. He’s always duplicitous. Besides, he comes out of the gate all proclaimed national heroics and over the top personal loyalty- they set him up as perfect, and the perfect guy is NEVER perfect, especially if we hear more about his perfection than see it. Their good/evil flip could be seen a mile away by anyone even remotely familiar with Hollywood tradition. It was pure laziness in an otherwise enjoyably executed action movie. Angelina (just awesome enough to make up for being a little creepy) deserves better from a movie for which she agreed to dangle from a windowsill 11 stories up.