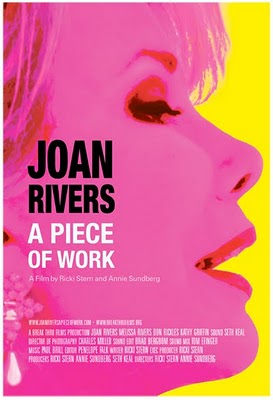 A Piece of Work

The documentary about Joan Rivers is doing really well. It’s gotten a lot of great press, strong ticket sales and a 91% fresh rating on Rotten Tomatoes. It also happens to be really good. It’s fascinating, disturbing, funny and tragic.

Highlights include footage of a young and vibrant Rivers in her early days on The Tonight Show, the heartbreaking tale of her losing the friendship of Johnny Carson, a scene showing her stomping on a heckler at a standup show (with more wit and heart in those improvised moments than in the rest of her act) and the harrowing reality behind her forced smile at the Comedy Central roast in her “honour”. The unsettling opening shots of Rivers applying her thick makeup in extreme closeup are never built on with an in-depth discussion of her plastic surgery compulsion, but strangely it’s not her other-worldly aesthetics that hold the fascination of Joan Rivers: A Piece of Work.

I’ve never known Joan Rivers as anything other than the scary lady making fun of everyone’s dresses on the red carpet. But tonight I saw her scared to open her play in New York because she thinks everyone hates her. I saw her confess that no man has ever called her beautiful, ever. I saw her scratch her way back into the limelight after losing everything. I saw her cope with the suicide of her husband and the betrayal of friends. I saw her in her 20s, looking just like Chelsea Handler as she pushed the envelope on what women were allowed to say. I saw her at age 75, staring hopelessly at an empty date book. I watched as she held tightly to her grandson’s hand as if frightened he might slip away and listened as she passive-aggressively tossed around Kathy Griffin’s name, her comedy descendant and… replacement, really.

The film’s most moving moments are when real tears spill over Rivers’ botoxed cheeks. When she talks about defending her daughter’s honour, Rivers begins to cry. But it’s when she reveals that she had to fire her long time friend and manager that she really got to me. The scary lady got to me, and I truly appreciated for the first time that she’s a person, not a punchline. She may look fake, but she’s real (and tough as nails to boot, not to mention loyal beyond reason). The revelation that with her manager gone she has “no one left to say ‘remember when’,” is heartbreaking. And when she speaks of being an actress at heart, playing the role of the comedian, her entire crazy persona snaps into focus.

Everyone already knows how this film ends. After winning Celebrity Apprentice, Joan Rivers has been back in the spotlight in the past few months. She’s released a new book and been performing steadily. The film goes out with the once-empty date book now filled with work. But the truly great thing is that over the course of a couple hours, the audience has come to care about the scary lady from the red carpet. We get her now: she’s very strange, but at the core of it all she just wants people to like her. Doesn’t everybody? Joan Rivers has been around for decades, fighting to stay in the industry she loves, no matter how many people try to get her to disappear. She really is a Piece of Work. And now, people who once couldn’t have cared less, can smile with knowing that the success of this documentary means that Joan Rivers is still holding on.