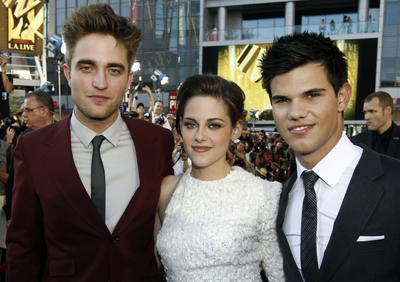 This post is brought to you by My Cinema’s new writer, Rachael.

To begin with, a disclaimer: If the mere thought of sparkly vampires makes your blood boil, if you’re so sick of Robert Pattinson’s face and Taylor Lautner’s abs that it makes you feel like Edward when Bella stands in front of a fan; or if you feel the sort of natural revulsion towards Stephanie Meyer’s super-popular series that is normally felt by vampires towards werewolves, stop reading now. Nothing I say, or the movie series does, is going to change your mind. Go see Toy Story 3, or hell The Avengers, and forget that I even mentioned it.

They gone? Now for the rest of us…
I came upon the Twilight series in the summer of 2008. It was a dark summer in my life, and Stephanie Meyers’ series was exactly what I needed: frothy, romantic, absurd, and anger-making. I instantaneously devoured the books, pouring over details, and found myself overcome with anger and frustration. Then the fourth book came out, followed closely by the first movie, and despite myself, I found I was the foremost expert on all things Twilight among my group of admittedly not-exactly-target-audience friends.
To summarize my thoughts on the first two movies, since I think it is relevant to my feelings about Eclipse: I thought Twilight was exactly what a movie version of Twilight should be: absurd, anger-making and filled with soulful longing. New Moon, on the other hand, was overly serious without being any better of a film, and despite the excellent emphasis on Taylor Lautner’s beautiful Jacob Black, I couldn’t recommend the film, even to my friends less inclined to dislike it.
And so it is with a minor disclaimer, and a fair amount of confidence, that I say that Eclipse is as much of a success as any movie based on the Twilight books can be.
With David Slade (30 Days of Night) behind the camera, this installment of the series that made abstinence cool is the very first to truly excel at anything other than lustful longing. The action sequences are kinetic, fascinating and occasionally frightening. The acting is more naturalistic, less tic-y, and (best of all) compelling. Even Kristen Stewart, who myself and thousands of Twilight fans have hated on since she first pouted her way into Edward’s heart, is made into a fully flesh and blood actress in this film.
But let’s be honest: nobody goes to a Twilight film to see Victoria’s head get ripped off. They go to see just how far Edward and Bella and Jacob will take things this time. The thing that really sets David Slade apart from previous Twilight directors is his deft melding of the action-y fantasy and the romantic dramedy playing out in front of us. He wisely uses Robert Pattinson’s ever-increasing dramatic range to offset Taylor Lautner’s natural comedic instincts, and the result is a love triangle that is compelling, even as it’s so clearly predetermined. The movie wisely uses the book’s greatest strengths (basically, how intriguing the characters of Edward and Jacob are) to offset the weaknesses (Edward’s possessiveness, Bella’s inaction).
The film is flawed: the pacing is occasionally off, the dialogue often ham handed. But David Slade brought out the natural grace of Stephanie Meyer’s characters and let them run free. Look no further than Jessica’s valedictorian speech (completely made up for the movie), in which recent Oscar-nominee Anna Kendrick delivers one of the movie’s major themes in a smart, witty, fun and character-appropriate speech. Slade gets both what makes teen girls flock to Twilight, and how to make a fun movie for people of all ages.
And yes, R Patts is pretty as hell, and Taylor’s abs continue to look chiseled out of something godly.