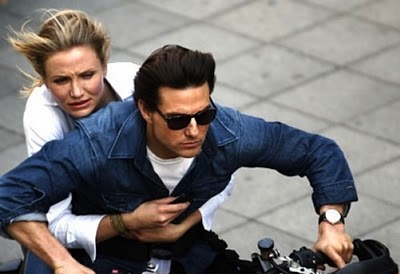 The Case for Simplicity

Tom Cruise is very good at stunts. He runs fast, shoots well, can dangle from a building, throw himself into things and generally leap and fling about heroically. He’s also charming, can hold the camera’s focus and deliver a line effectively. He’s quirky, can play interesting characters and instantly earns the audience’s trust, even if most of them adamantly believe him to be a crazy person (a belief I don’t fully subscribe to but understand the foundations for). Cameron Diaz, though never a favourite of mine (except in My Best Friend’s Wedding, she’s adorable in that), is similarly charming and capable. Paul Dano is one of the best young actors of his generation, delivering standout performances in some of the most acclaimed films of the decade. Viola Davis has 2 Tonys, 2 Drama Desk awards and an Oscar nomination to her name. Peter Sarsgaard is basically a god of complexly layered characters. Knight and Day had a basically solid script with strong backstory, decent characters, an engaging conflict and good pacing. The components were there for it to be a not-too-guilty summer pleasure movie. It seemed destined for action-comedy triumph.

So why is it so darn bad?

The answer is one word, and one word only: EFFECTS.

Knight and Day is brimming with action sequences so over complicated that it’ll make your head spin. It takes you all over the world, into situations the story doesn’t require or support and on more motorcycle and classic car rides than you can shake a stick at. But we may as well have been in the 1970s for all the technological sophistication in this film. They had an actor with more stunt experience than almost any other and yet couldn’t just let him do his thing. A couple simple shootouts, a well-shot explosion here and there, some cleverly choreographed fights and maybe one chase scene (done properly, with actual chasing) was all the film needed to fulfill the action requirement in its action-comedy definition. But no, for some reason, a motorcycle ride through the running of the bulls was somehow deemed mandatory. So instead of a cleverly fun film featuring some truly engaging talent, we got a distractingly over-ambitious romp that looked like it was made at a local access channel using the weatherman’s green screen.

There are few things more aggravating than a movie that could have been decent destroyed by a single department, and in the case of Knight and Day, the blame lies entirely with the special effects guys.