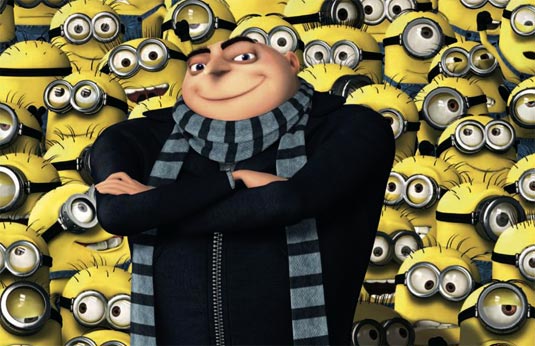 Not At All Despicable Me

I’ve come to take it as a granted that my favorite movie of the summer and year will probably be a Pixar film. I’ve learned to accept that the film that’s going to bring me to the highest level of pathos and enjoyment will inevitably be something brought to me in animated form. This has been true since Ratatouille. But since last year*, it seems like the other animated studios are stepping it up,and, with absolutely no offense to Toy Story 3 (which was brilliant, fantastic, moving and amazing), actually challenging Pixar for its dominance of brilliance. And while Despicable Me doesn’t quite unseat Toy Story 3, it comes so damn close it’s pretty remarkable.

Despicable Me tells the story of Gru, a super villain by trade, who comes up with a plan to increase his super villain cred that requires the adoption of three little girls. It doesn’t seem like a great premise, but damn if this movie doesn’t make the tired “maladjusted guy needs children to make him grow up” premise and ring every laugh, joy, and tear out of it.

Major props should go to Steve Carrell’s excellent voice work (the accent alone is enough to power at least half of the movie’s jokes) as well as a fantastically surprisingly witty script (that doesn’t fall into the “cheap pop culture” joke camp OR the “cheap fart and poop” joke camp that dog children’s movies). But it shouldn’t be understated how fantastic the art direction is on this piece. Although it forgoes the soaring landscapes of a typical lauded film, the overall look of this film (campy, ridiculous, and yet still beautiful and deep) really helps to keep the constant, goofy jokes and engaging narrative alive. Look no further than the brilliantly crafted “Minions” than to see how excellently these guys do silent physical comedy.

In the end, the result is a movie that is one part classic Mel Brooks farce (or maybe old school Pink Panther film, the Peter Sellers kind, not Steve Martin), one part The Incredible, and one part Big Daddy. Yet despite that weird concoction, the result is something fantastic, surprising, pee-your-pants funny and infinitely quotable.

*which saw The Princess and The Frog, Coraline, and Monsters Vrs. Aliens all stepping up the non-Pixar-studio game